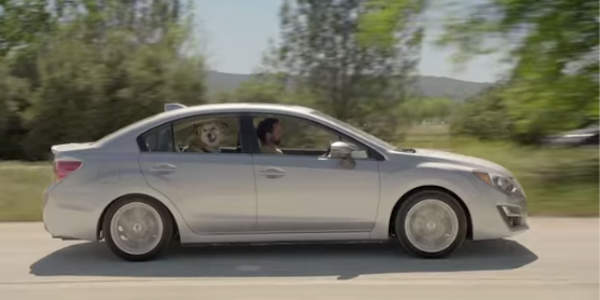 Man's best friend will make you want to buy a Subaru

Subaru’s ad agency is at it again and uses a dog to want you to buy a Subaru. It’s the new 2015 Subaru Impreza and a 14 year old dog. Will it work?
Advertisement

Subaru of America just launched another TV spot and this time they use a Yellow Lab to draw in new buyers to the brand. Their brilliant ad agency, Carmichael Lynch uses mans best friend to get you to buy their Subaru Impreza compact car. Their ads seem to be working because Subaru has seen their 43rd consecutive month of year over year growth. And this has been since Carmichael Lynch took over their advertising about the same time as the growth started.

This new spot is centered around a 14 year old dog and his owner who rewards his faithful friend with a “Dream Weekend”. The one minute TV spot follows a bucket-list weekend enjoyed by a man and his four-legged best friend, set to a song by Willie Nelson. Check out the spot below.

The spot tugs at your heart as you watch this man take his 14 year +3/4 old Yellow Lab out for his “Dream Weekend” doing all those things a dog would love. The new commercial emphasizes the importance of a life well lived and asks the question: How can you ever possibly repay your dog for the lifetime of love and companionship he has given you?

Subaru uses their new 2015 Impreza compact sedan to answer that question. The spot is produced by Agency of Record Carmichael Lynch and directed by Directors Guild of America award winner, Noam Murro. The new ad features “I’ve Loved You All Over The World” by singer-songwriter, Willie Nelson. This song, comes from Nelson’s studio album, Teatro, and was released in 1998 and features Emmylou Harris as a background vocalist.

Subaru has even launched a new national social media campaign called #MakeADogsDay. Subaru says the social media focused initiative is “designed to inspire and encourage all dog lovers to do even more for their pets, and to share their ideas with the world.” Subaru launched this on their Facebook page this week.

Subaru says, “Dogs make the world a better place. We believe it’s time to do amazing things for dogs. That’s why we’re inviting you to share the ways you #MakeADogsDay. It may just help the Japanese automaker sell more Subaru vehicles like the 2015 Subaru Impreza compact. Their ad campaign seems to be working too.