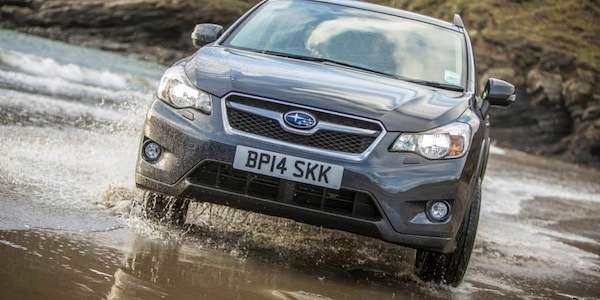 Subaru launches a new TV ad for the 2015 XV Crosstrek. Is it Corny or calculated? [video]
Advertisement

You’ve probably seen the ads for Subaru with people hugging trees, wrecked cars, near misses by huge boulders and now a young couple being transformed into little kids while driving a Subaru XV Crosstrek. Many people would say Subaru’s ads are corny, but Subaru says in a new ad campaign, they want to portray their XV Crosstrek crossover as a vehicle with a go-anywhere attitude and fun-loving spirit. They do it with their XV crossover being a fountain of youth for its owners.

Subaru of America’s (SOA) new ad campaign for the 2015 XV Crosstrek called “Fountain”, created by agency of record Carmichael Lynch, is a stretch to say the least. In this commercial for the Subaru XV Crosstrek, a couple takes off on an outing and finds rejuvenation along the way. The couple becomes physically younger as they venture out in the crossover, and Subaru says, “It illustrates how a drive in a new XV Crosstrek can unleash the hidden child in us all.” SOA also says, “Never underestimate the power of getting away from it all.”

Advertising Age says the Subaru ads are working so well that they have put them on their Marketer A-List. Ad Age evaluated companies based on creativity, financial results and their ability to engage consumers. They selected the year's 10 best companies and highlighted Marketers to Watch and Global Marketers of Note. Subaru was selected as one of the ten companies by Advertising Age.

When Subaru decided to deviate from engineering and feature-focused campaigns in 2008 to embrace "Love," an umbrella campaign that focuses on the passion points of Subaru owners, the automaker has posted six consecutive years of record-breaking sales. Last year, Subaru sold 513,693 vehicles and hit an all-time high U.S. market share of 3.4 percent.

The momentum continues for the brand

Whatever people think about Subaru’s corny and quirky ads, buyers have been drawn in part by the brand's distinctive personality. "The amount of momentum at Subaru is really incredible now," said Alan Bethke, VP-marketing, noting that 60 percent of Subaru sales in 2014 are "conquests," buyers switching from a different car brand.

Subaru has another corny ad and this one for their new 2015 XV Crosstrek. Advertising Age says Subaru is one of the 10 best global companies to watch. Whatever Subaru is doing, it’s working and attracting new buyers to the brand.

LG's New EV Battery Plant Is a Welcome News for Tesla
Tesla Giga Berlin's New Hurdle: It's Not Only the Gov't, but Now Tesla Itself
END_OF_DOCUMENT_TOKEN_TO_BE_REPLACED