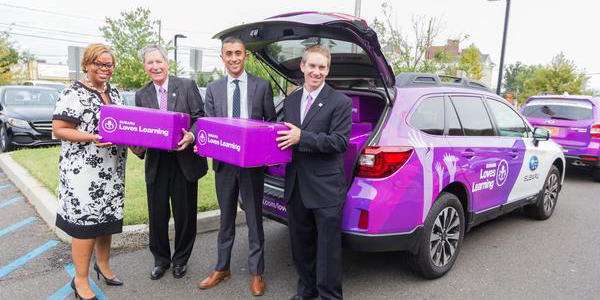 How did Tom Doll transform tiny Subaru into an industry giant by being a delivery boy? It's all about the Love.
Advertisement

Do you know who Tom Doll is? He makes deliveries in a 2017 Subaru Outback to local schools, and he’s also the guy who turned Subaru into an auto industry success. Doll is COO of Subaru of America and they just announced its donation of more than 1,700 award-winning science textbooks to 17 Camden, NJ schools, where Subaru has their US Corporate offices. Doll was the guy to help make the deliveries.

It’s what COOs do right?

It’s what this COO does. Tom Doll has been responsible for creating Subaru's brand identity that resonates with consumers that goes far beyond the dealer showroom and their automobiles. He knows how to make the Subaru brand successful, and Subaru does it many ways, one of which is donations to local schools.

Doll recently told Bloomberg that sales took off when they “stopped acting like a car company.” This is when the automaker who specializes in all-wheel-drive vehicles started the “Love“ campaign sales ads. Subaru’s customers love their all-wheel-drive vehicles. They also love it when the Japanese automaker helps in the local community. Their latest initiative is called, “Subaru Loves Learning.”

Tom Doll has been the driving force to turn Subaru into a growing and profitable automaker here in the U.S. More than 60 percent of Fuji Heavy Industries (FHI) revenue and profit originates in North America, where vehicle sales volume has tripled over the past eight years. As a result of Doll’s leadership, Subaru has grown steadily from selling 187,000 vehicles in 2007, and expects to sell over 600,000 vehicles in the U.S. this year.

Tom Doll doesn’t send his underlings out to deliver the donated school books. He gets in the Blue and White “Subaru Loves Learning” 2017 Subaru Outback and helps deliver them himself. It’s a good example to other COOs on how to transform a small car company into a successful industry powerhouse. It’s all about the Love.