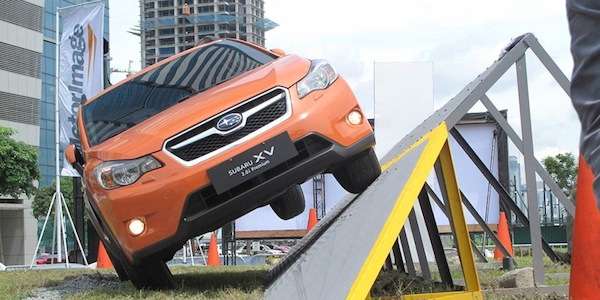 Is a 2015 Subaru XV STI Performance Edition really in the works?

Subaru is launching the new 2015 WRX and WRX STI in Malaysia and is working on a 2015 XV Crosstrek STI variant.
Advertisement

At the regional launch of the 2015 WRX and 2015 WRX STI in the Philippines, Tan Chong Subaru International executive director Glenn Tan, revealed to members of the media, that a new variant of the XV called the XV STI Performance Edition is set to launch in Malaysia. The XV was launched as a new model in 2012 and is selling well for Subaru around the globe. It is a sporty crossover and the perfect model for STI to modify.

How many STI goodies will it get? According to Tan, the new XV performance model will get STI treatments and parts from the STI catalogue. But it won’t be getting any engine upgrades for now. At the WRX/STI launch this week Tan said, “There’s no engine tweaks; it’s more about handling. We will introduce the new XV STI Performance Edition sometime in July.”

Like the Subaru BRZ tS, this XV STI Performance Edition will get suspension tuning from STI, that will make it a better performer. What did the BRZ tS get from STI? BRZ tS features exclusive tuning to the chassis like a large-diameter driveshaft and STI's suspension upgrades that improves handling performance. The new tS has improved handling in the corners with the addition of STI upgrades like a new STI rear suspension link with pillow ball bush, STI tuned strut and coil springs for front suspension and STI tuned damper and STI coil springs for the rear suspension.

This is likely what the new 2015 XV STI Performance Edition will receive. It will also come with special STI wheels, and STI badging on the outside and inside. It could get larger wheels and Brembo performance ventilated disc brakes for better stopping performance. It could also come with a front lip spoiler.

But performance fans here in the U.S. won’t likely see the 2015 Subaru XV STI Performance Edition anytime soon. This STI upgraded XV will be for the Malaysia market only for now. But it’s good to see the performance tuner STI working on other models for Subaru. A true XV Crosstrek STI would be a hot item around the globe if Subaru decides to tune the crossover like the 2015 WRX and WRX STI. Stay tuned to Torque News for the latest STI news from Subaru.

Other Subaru STI stories of interest.