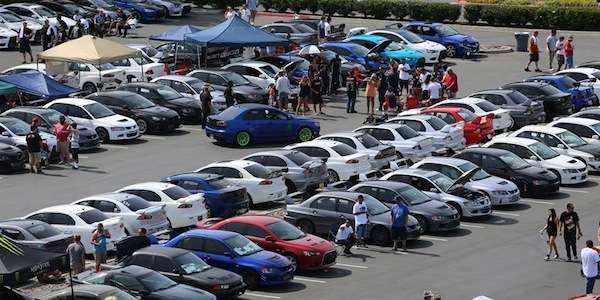 2015 Mitsubishi Lancer EVO bows out among hundreds of angry fans

The last 2015 Mitsubishi Lancer Evolution was unveiled at the Mitsubishi Owners Day. Why are EVO owners so unhappy?
Advertisement

Hundreds of Lancer Evolution owners from across the nation traveled in the early hours of July 12, 2014 to come together in celebration of the triple diamonds brand at Mitsubishi North American headquarters in Cypress, CA. But it was a sad day for performance fans as the last generation of the Lance EVO bows out after this year. And performance fans are not happy about it.

The Mitsubishi brand is going in a new direction with their entire product line and they are coming with a totally environmentally-friendly lineup in the very near future. And fans of the EVO are not happy with this direction. On a recent Mitsubishi Facebook post, one fan made his feelings known for all to see.

Ian Wirick said, “Hey Mitsubishi, look real close. Those are the customers you have excluded and will soon leave out in the cold with your product strategies. I didn't see one Outlander or i-MIEV in the photos displayed here and for good reason. You never found a way to honor your loyal customer. You have said goodbye to so many models and soon the most exclusive one, the Lancer Evolution.”

Many performance fans are upset

This is a common sentiment from Lancer Evolution fans who want to see the legendary performance car continue in the Mitsubishi lineup. Hundreds of EVO fans showed up at Mitsubishi North American headquarters in Cypress, CA to show off their cars, but also to show how passionate they are about this rally-bred sports sedan.

The last EVO bows out

Mitsubishi has said the 2015 Lancer Evolution will be the last of this generation before it makes its North American exit. Mitsubishi has been very secretive about the next-generation performance car, but its going to undergo some big changes. It will likely have a new name and a high-performance hybrid powertrain that MMC has been developing in its motorsports program.

The last 2015 Mitsubishi Lancer Evolution made its North American debut among hundreds of passionate EVO fans who brought their cars to MOD to show how much they love this car. Will fans be able to embrace the new direction Mitsubishi is taking the brand?

Matt wrote on July 16, 2014 - 10:01pm Permalink
It's certainly sad to see Mitsubishi opting out of the high-performance market like this, but the fact is that they're a small manufacturer with limited R&D resources that has to carve out a niche for themselves in growth areas if they want to thrive. A couple of hundred EVO fans pale in comparison to the potential PHEV market that they're pivoting towards.
Mr. Speed wrote on August 31, 2014 - 4:53am Permalink
EVO fans quite crying already. High performance vehicles replacing the crappy mileage EVO will have almost double the horsepower (500) and torque (1000) and will be a lot cheaper to drive and maintain. High output hybrids are coming first in 2016, followed by 100% electric in 2020. Before you start moaning, youtube "white zombie vs corvette" to see the light.