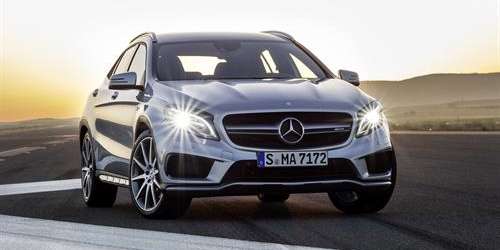 The all-new 2015 Mercedes-Benz GLA45 AMG has been uncovered before it launches at NAIAS.
Advertisement

When Mercedes-AMG gets their hands on a new Mercedes-Benz model, it doesn’t take them long to transform the vehicle into something special. That’s why we love Mercedes-AMG here at Torque News. They can take a compact SUV and turn it into something truly fun and fast. The all-new 2015 Mercedes-Benz GLA45 AMG has been uncovered before it makes its global debut at NAIAS.

We’ll cover the highlights of what AMG will do to make the new 2015 GLA-Class a performance SUV. It starts under the hood of the premium compact SUV. It gets the world’s most powerful series-production four-cylinder engine on the planet. Every AMG engine is hand-built by a master tech and his name is stamped on the performance mill.

The AMG 2.0-litre turbo engine produces 360 hp and develops a peak torque of 450 Newton meters. A power density of 181 hp puts the AMG high-performance turbo engine on a par with the world's most powerful super sports cars. It has the power to excite any performance fan.

How fast will the new GLA45 AMG go? It will launch from 0-100 km/h in 4.8 seconds. Mercedes-AMG uses a combination of the AMG Performance 4MATIC all-wheel-drive system and the AMG SPEEDSHIFT DCT 7-speed sports transmission to deliver power to all four wheels. It will have an electronically limited top speed of 155 mph.

Outside, the GLA45 AMG Concept gets special goodies that will command attention on the street. It gets AMG forged wheels in a five-twin-spoke design with 235/45 R 19 tires which are painted titanium grey. It also features AMG’s high-performance braking system and an AMG sports suspension.

The AMG front apron with front splitter and the AMG "twin blade" radiator grille provide athletic highlights to set the performance SUV apart, and both are painted matte titanium grey. It also features the distinctive AMG lettering at the side between the louvers of the radiator grille. This will make all new AMG models easy to recognize on the street. Black flics (air deflector elements) above the large cooling air intakes at the sides are indicative of motor sport. Bi-xenon headlamps come as standard.

The 2015 Mercedes GLA45 AMG Concept made its world premier at the LA Auto Show and was an instant hit with attendees, so the German automaker was quick to put the car into production. Tobias Moers, Chairman of the Board of Management of Mercedes-AMG GmbH: "The response to the Concept GLA 45 AMG during the world premiere at the Los Angeles International Auto Show has reaffirmed our decision to launch this new AMG model.

The new GLA 45 AMG will celebrate its world premier on January 13, 2014 at the North American International Auto Show in Detroit, Michigan. The performance 2015 Mercedes-Benz GLA45 AMG will launch first in Europe. Specification and pricing are still to be confirmed. Stay tuned to Torque News for more details on the new high-performance SUV from Affalterbach.