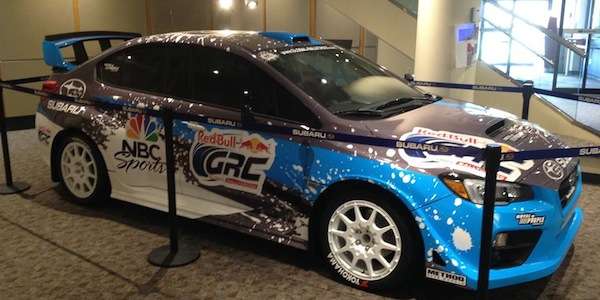 We’ll have to wait for the 2015 Subaru WRX STI Global Rallycross race car to make its debut. But Subaru will be bringing a new car in the 2014 Subaru GRC STI that makes its debut. It will be at the Red Bull Global Rallycross that opens the 2014 season on May 17-18 in Barbados in conjunction with Top Gear Festival Barbados. This first race will see lots of action and will bring a great lineup of drivers and teams and possibly the most exciting racing action on the planet.

It will be an exciting series this year as new teams and drivers bring tons of driving excitement for race fans. What drivers will be featured for Subaru? Three-time European rallycross champion Sverre Isachsen along with skateboarding champion and 2013 GRC Sportsmanship Award winner Bucky Lasek will drive the 2014 Subaru GRC STI. The all-new 2015 Subaru WRX STI will debut later this season. We will likely see David Higgins and Travis Pastrana in later races in the new 2015 GRC STI cars.

The Red Bull Global Rallycross series will be televised by NBC. NBC Sports will carry nine race broadcasts on the NBC broadcast network, primarily live, with re-airs on cable on the NBC Sports Network.

*The RedBull Global Rallycross event at the ESPN X Games in Austin, Texas will air on ESPN.

You will see Royal Purple, premium synthetic lubricant manufacturer, displayed on the Subaru GRC STI cars this year. They are also an established series partner to the Global Rallycross series. Subaru Rally Team USA announced they have joined forces with Royal Purple in a multi-year agreement. The team, managed by Subaru technical partner Vermont SportsCar, will begin to utilize Royal Purple products in each of their factory Rally and Rallycross teams this year.

The all-new 2015 RallyCross STI was uncovered at the New York International Auto Show for performance fans to see. The first Global RallyCross round will be held this weekend in Barbados, in conjunction with Top Gear Live. The race will air on NBC May 24 at 1:00 p.m. EST. We’ll see the new 2014 Subaru GRC STI cars this weekend. We have to wait to see the 2015 RallyCross STI in action later this fall.