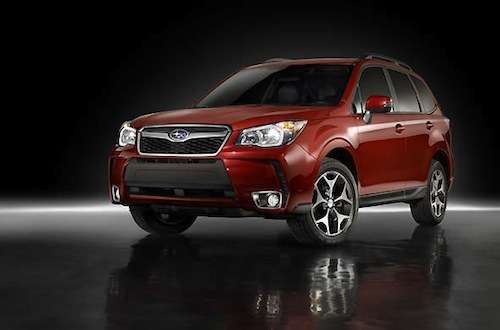 Subaru has released details on the all-new 2014 Forester crossover that will come with a new turbocharged engine, improved fuel-economy and more interior room than the outgoing model.
Advertisement

Subaru has revealed the all-new 2014 Subaru Forester crossover SUV with a new turbocharged engine, a broader profile and a roomier interior. The 2014 Forester is the fourth-generation Forester crossover and gets a whole new makeover both inside and out. The all-new Forester will make its world premier in Japan on November 13th, and its North American debut at the Los Angeles Auto Show that starts on November 30, 2012. The Forester made its debut in 1997 and continues to make its advance as a global SUV.

The 2014 Subaru Forester will come with an all-new 2.0-liter direct-injection turbocharged Boxer engine producing 250 horsepower and 258 lb ft of torque. It will also come with a new intercooler for increased performance.  The new 2.0-liter will replace the outgoing 2.5-liter horizontally opposed turbocharged four-cylinder engine in the Forester 2.5XT model. That turbo powerplant was a belt-driven twin-cam engine that produced 224 horsepower and 226 pound-feet of torque. It achieved an EPA estimated 19/24 city/highway mileage on premium fuel.

The 2014 Forester crossover will also feature the standard naturally aspirated 2.5-liter Boxer engine that was introduced in the outgoing model. It will still have the same 170 horsepower and 174 lb fy of torque, but Subaru says fuel economy is expected to increase in the 2.5-liter standard boxer engine as well. The previous model engine had an EPA estimated 21/27 mpg city/highway. It will also come mated to the new Lineartronic continuously variable transmission. Both variants will be available with a new six-speed manual transmission.

The new 2014 Subaru Forester will come with the Symmetrical all-wheel-drive as standard on all models, and the 2.0-liter turbo will come with the high-torque CVT with six-speed and eight-speed manual modes and Hill Decent Control. Subaru has also updated the suspension on the new crossover for better ride quality and handling ability.

The outside of the new-generation crossover SUV will have a broader profile than the previous model and that will give the 2014 Forester a larger interior. Subaru says the footprint will remain virtually the same as the outgoing model. The 2014 Forester will offer increased rear seat legroom, and an enlarged cargo area. In-demand infotainment features will be offered, including smartphone integration, navigation, rear view camera, and harman/kardon premium audio system and speakers.

The 2014 Subaru Forester certainly seems much improved over the previous-generation model. The new 2.0-liter turbocharged engine underneath will prove to be more powerful and yet gets improved fuel-economy. Inside, the new crossover will provide more room and versatility. Following the premier on November 13th in Japan, the all-new Forester will be introduced around the globe in other major markets.

Look for the North American debut of the all-new 2014 Subaru Forester at the Los Angeles Auto Show November 30th-December 9th, 2012.