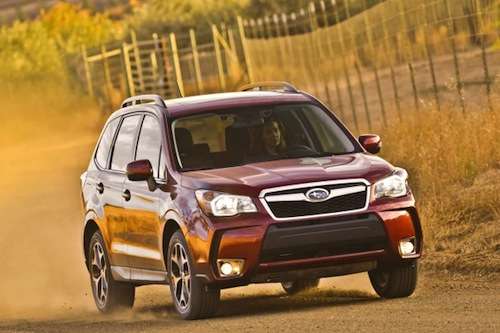 Subaru will debut their new in-car infotainment system in the new 2014 Forester and later this year in the 2014 Impreza, BRZ and XV Crosstrek.
Advertisement

Subaru has announced they will debut their new Starlink in-car connectivity system at the Consumer Electronics Show (CES), and the new 2014 Subaru Forester will be the first of the brand's cars to feature it. Subaru will be at the 2013 CES with a stand-alone booth and presentation for the first time and will also be introducing their Aha integration and new EyeSight driver assist system on the all-new 2014 Forester.

Subaru will also include the new infotainment system in the Legacy and Outback models as a running change for the 2013 model year. Subaru’s new Starlink connectivity technology represents the Japanese automaker's new infotainment strategy that will be featured in their cars starting this year. The new Impreza, BRZ, and XV Crosstrek will be receiving the integration this summer for the 2014 models.

Starlink developed by the ICFT team

Starlink was created by a team of engineers at Fuji Heavy Industries Ltd. which owns Subaru, and is a new cross-functional infotainment in-cabin system. The goal of the global team of engineers, planners, and marketing strategists who worked on the project, was to enhance connectivity & safety technology features in Subaru vehicles, while also simplifying and reducing overall cabin complexity.

Akio Takai, FHI Deputy General Manager, and leader of the infotainment cross-functional team (ICFT) said, "We understand that the driving experience is about much more than mobility, and we know that today's car shopper is looking for technologies that are value-added but also safe, helping them accomplish their daily errands without adding to driver distraction."

The new Starlink connectivity system will also feature TripAdvisor for personalized hotel recommendations while traveling. Also while on the road, customized weather, surf and local park information will be available. To stay connected to social networking, Starlink will be able to access Facebook and Twitter newsfeeds in audio. While out on the town, owners can get personalized restaurant and cafe recommendations from Yelp. Subaru says the system will be continually growing with the channels from Aha constantly changing allowing customers to always be able to access their favorite content from the web.

David Sullivan, Cross-Car Planning Manager for Subaru of America said, "Subaru STARLINK is about enhancing the driver's experience." Aha gives drivers an easy, inexpensive and safe way to interact with information from their smartphone device without touching it while driving - the simple to use interface is transferred to your vehicle navigation screen automatically. We research, talk, and interact with consumers regularly -- and many are looking for a safe way to utilize their apps in-car. We think the Aha app integration is a great way to kickoff our STARLINK efforts, and has much of the content our customers are looking for."

Subaru will also be featuring their new driver assist system called EyeSight that has been wildly popular in Japan and is being offered for the first time on the 2014 Forester. The majority of buyers in Japan are choosing the new safety system on the XV Crosstrek which includes Pre-Collision Braking System, Pre-Collision Brake Assist, Pre-Collision Throttle Management, Adaptive Cruise Control, Lane Sway and Departure Warning and Lead Vehicle Start Alert.

With the new Starlink connectivity and EyeSight safety systems, Subaru has developed technology that will continue to evolve and grow over time. They will be able to add new partners and connectivity capabilities and give consumers the type of technology they are looking for. Look for Starlink to debut first in the all-new 2014 Subaru Forester in all navigation-equipped vehicles.