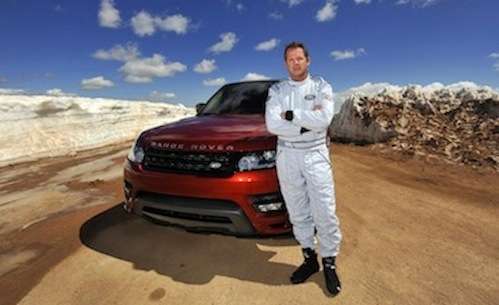 The new Range Rover Sport is more than just a pretty face that Daniel Craig drove in New York at its reveal in March. The newly redesigned SUV is the real deal. A new hill climb record on Pikes Peak has confirmed that the new luxury SUV is one tough son-of-a-gun. The 2014 Range Rover Sport set a new hill climb record for a production SUV. And it was accomplished on Colorado’s 14,000 ft Pikes Peak 12.42-mile mountain hill road.

Land Rover announced the new Range Rover Sport established the record for a production-standard Sport Utility Vehicle and broke the long standing record for any kind of production-standard vehicle on the Pikes Pike International Hill Climb course. The feat was accomplished yesterday at the venue of the spectacular annual competition known as 'The Race To the Clouds'. It’s one of the most challenging and unforgiving driving challenges on the planet.

The new luxury four-door Sport climbed the 12.42-mile Pikes Peak asphalt course in just 12 minutes 35.61 seconds. This course is tough because of the extreme altitude of the mountain road. The mountain course goes through 156 corners as it ascends beyond the treeline from 9,390 feet (2,860m) above sea level to 14,110 feet (4,300m). The rarified air contains only 58% of the oxygen it does at sea level, diminishing both engine and driver performance.

The new record was set at an average speed of 59.17 mph (95.23 kph) on the twisty road that “clings to the edge of the mountain with precipitous drops on one side and unyielding rock faces on the other.” PPIHC (Pikes Peak International Hill Climb) timed the performance as Pikes Peak “hill climb specialist” Paul Dallenbach drove the Range Rover Sport on the record run Thursday. A stock Range Rover Sport with a 510PS supercharged 5.0-liter V8 engine set the record and the only modifications were in the fitment of a roll cage and harness seatbelts to meet racing safety requirements.

The Sport is fast, responsive and agile

Dallenbach who lives in Basalt Colorado knows the mountain and has won his division at the Hill Climb six times and won the event outright three times. He said, "There's no margin for error at Pikes Pike - you only need to misjudge one of those 156 turns and you're into the trees or over the edge of the mountain. To take on this place the way I did today, you need complete confidence in your vehicle, and the Range Rover Sport sure gave me that - it's fast, responsive and agile. I was able to place the car exactly where I wanted it on the road to keep to the optimum high-speed lines through corners. This is a hugely capable vehicle and I'm proud to have been part of demonstrating that by setting a new Pikes Peak record"

This record run up Pikes Peak is the first of a series of global driving challenges to be taken-on by the Range Rover Sport that will span four continents. Each will push the all-new 2014 Range Rover Sport to new punishing limits around the globe. Stay tuned for the next new challenge.