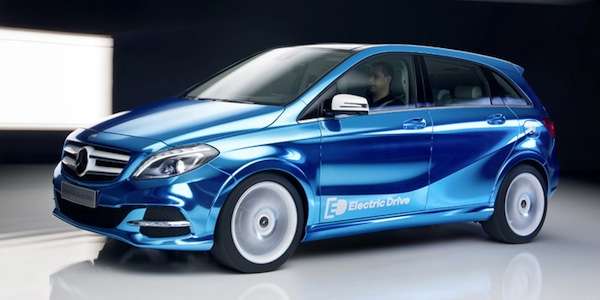 The first all-new 2014 Mercedes-Benz B-Class Electric Drive has rolled off the assembly line in Germany.
Advertisement

We first saw the new 2014 Mercedes-Benz B-Class Electric Drive at the New York Auto Show last year. It’s a compact four-door with seating for five and is based on the existing second-generation B-Class. Daimler AG, maker of Mercedes-Benz, owns a 4.3 percent stake in Tesla Motors, and will use a Tesla-designed all-electric drivetrain in the new B-Class Electric Drive. This isn’t the first electric vehicle for Mercedes, they also sell an electric version of the Smart city car and has rolled out a battery-powered 2014 SLS AMG gull-wing supercar that set a record at Nurburgring.

It’s powered by a Tesla-designed 100kW electric motor delivering 134 horsepower and 228 lb-ft of torque. Mercedes says it has an estimated range of 115 miles. Battery power comes from a 28 kWh lithium-ion battery that is tucked away in rear floor “Energy Space.” Mercedes says the new electric compact has a 0-60 sprint time of less than 10 seconds.

How far will the new compact go on a charge? The new B-Class Electric Drive has a range of about 60 miles achieved in about two hours with 240 Volt/40 Amp power source. It can be charged at any standard outlet. But many public charging stations are rated for 30 amps making the time for a full recharge closer to three hours.

The new Mercedes electric will come with an intuitive in-dash power display. This display shows electric drive nformation, such as power level, estimated remaining range, and the amount of energy being recovered from regenerative braking. It will also feature connected vehicle technology with remote monitoring and charging features.

It looks like Mercedes will target the BMW i3 in the luxury electric drive market, but could take away sales from the Nissan Leaf. We don’t have pricing information from Mercedes-Benz at this time, but B-Class Electric Drive is expected to sell in the low $40 thousand dollar range.