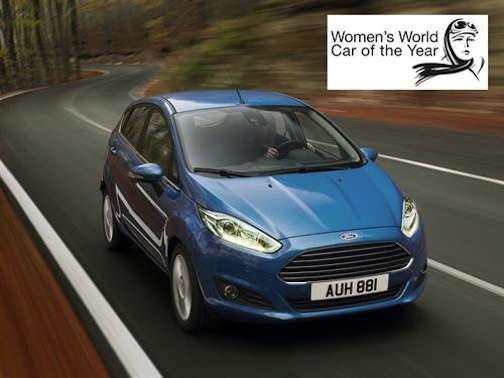 The 2014 Ford Fiesta is the most popular car in the world with women and beats Porsche Boxer S, Audi Allroad and new Range Rover as “Women’s World Car of the Year.”
Advertisement

The 2014 Ford Fiesta 1.0-liter EcoBoost is making quite an impact around the world and women think it’s sexy. The sporty compact car is the favorite car among women and its won the Women’s World Car of the Year award. It also took home the Women’s World Car of the Year Economy Car title. In fact, women loved the compact Fiesta more than the Porsche Boxster S, Audi Allroad, and new Range Rover. That’s quite an accomplishment for the little Fiesta.

A panel of 18 female auto journalists praised the 2014 Ford Fiesta 1.0-liter EcoBoost for its “high-end look and feel” and fuel efficiency. All the cars were judged on factors including safety, value-for-money, aesthetic appearance, storage space, child-friendliness, ease-of-driving, color, sex appeal and environmental footprint.

The stylish new Fiesta is making big waves with all buyers but women are certainly purchasing the car in record numbers. Fiesta has long been a British favorite and it currently outsells its nearest competitor more than two to one and has just surpassed four million sales in the UK.

Women seem to be drawn to the Fiesta’s sporty and sexy demeanor. WWCoTY UK judge, Victoria MacMillan Bell, said:  “The Fiesta has a real high-end look and feel to it.  Pair this with the multi-award-winning 1.0 litre EcoBoost engine which reaches range and performance levels never seen before, and this stylish pocket rocket wins in every category.”

Beating the likes of Porsche, Audi and Range Rover speaks volumes as to what women are looking for in a car. “It was clear from the outset that the new Fiesta 1.0-litre EcoBoost had struck a chord with our panel of female motoring experts from around the world,” said Women’s World Car of the Year chief judge, Sandy Myhre of New Zealand.

The new Ford Fiesta has raised the bar in the compact car segment and it gets higher ranking with women because of its sexy looks, fuel-efficiency and sporty driving character. That’s a good combination when it comes to a global car that is setting the world on fire and is appealing to the largest consumer group in the world: women.

And men are drawn to the 2014 Ford Fiesta ST which is the fastest small production car on the planet. Customers in the U.K. have bought more than half of all models sold to date, with Germany placing the next largest number of orders, followed by Switzerland. Customers can’t wait to get their hands on the small performance car.

Ford has done a great job of making the new 2014 Fiesta a global car that appeals to both men and women. Barb Samardzich, vice president Product Development, Ford of Europe. “By tuning into the needs of all our customers we are ensuring this small car with the big history has a very bright future.”

Women are drawn to the new 2014 Ford Fiesta because of its bold new exterior, an interior optimized for ergonomics and comfort, as well as Ford MyKey, SYNC and Active City Stop features. We haven't heard the last from the sporty new compact. Look for the 2014 Ford Fiesta to receive the fifth Women’s World Car of the Year awards in London in October.

Elon Makes a Cybertruck Statement With an Action, But Quiet in Words
Tesla's Record Month in China: Doubled Registrations in March 2021
END_OF_DOCUMENT_TOKEN_TO_BE_REPLACED