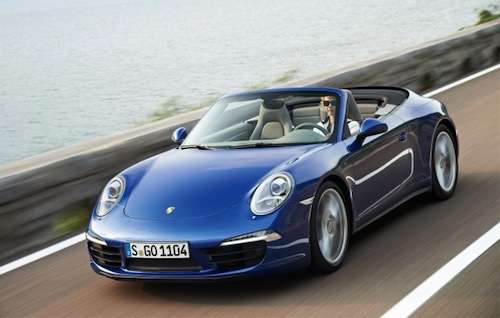 Porsche has announced that the 2013 911 Carrera 4 models are lighter, faster and will come with improved wet or dry performance.
Advertisement

Porsche has released information on the new 2013 911 Carrera 4 and 911 Carrera 4S models and they will be coming with the latest all-wheel-drive system. While the new-generation 911 Carrera S has been getting awards for its track-ready performance, we haven’t had details on the Carrera 4 models. Porsche has just announced details on the new seventh-generation 911 Carrera 4 models and they will be coming with Porsche’s latest version of the active all-wheel-drive system, Porsche Traction Management (PTM). They will also be lighter, more fuel-efficient and offer new technology.

The 2013 911 Carrera 4 and 911 Carrera 4S, both Coupe and Cabriolet will all be fitted with the new all-wheel-drive system. The AWD Carrera 4 models will be launched with the same lightweight body design, suspension, engines and gearboxes as the rear-wheel drive versions. Porsche says the new 2013 models will use significantly less fuel even with a higher level of performance than the previous models. As most automakers are doing today, Porsche has reduced weight in the new 911 Carrera 4 by up to 143 pounds with an increase in fuel mileage as much as 16 percent.

The all-new 2013 Carrera 4 models with all-wheel-drive will feature a wider rear section than the standard model. The rear wheel housings extend out further by 22 mm, with 10 mm wider rear tires for improved traction on wet or dry pavement. The rear tail light band on the 911 Carrera C4 has also taken on a new look.

The 911 Carrera 4 S Coupe and Cabriolet will be powered by a 3.8-liter boxer engine that produces 400 horsepower. Porsche says the new sports car will launch from 0-60 in 3.9 seconds (Cabriolet: 4.1 seconds) with a top speed of 185 mph (Cabriolet: 183 mph). The 911 Carrera 4 Coupe will feature a 3.4-liter, 350 hp flat-six engine that will sprint from 0-60 mph in just 4.3 seconds (Cabriolet: 4.5) and reach a top-track speed of 177 mph (Cabriolet: 175 mph), depending on equipment features. Both engines will come mated to a seven-speed manual gearbox as standard, and the Porsche Doppelkupplung (PDK) seven-speed gearbox will be optional.

Also new for 2013, the all-wheel-drive models will feature a menu in the instrument cluster that will inform the driver how the PTM all-wheel drive is currently distributing engine power. With the new 911 Carrera all-wheel-drive models, Porsche is making the optional Adaptive Cruise Control (ACC) available to the entire model range. And when ordered with PDK, the ACC system adds the safety function Porsche Active Safe (PAS), which helps prevent front-end collisions.

Additional new features for 2013 include a new sliding glass sunroof as an optional feature for the 911 Carrera Coupe. And 911 cars with a manual gearbox and Sport Chrono pack, in Sport Plus mode, the system automatically double-clutches during downshifts.