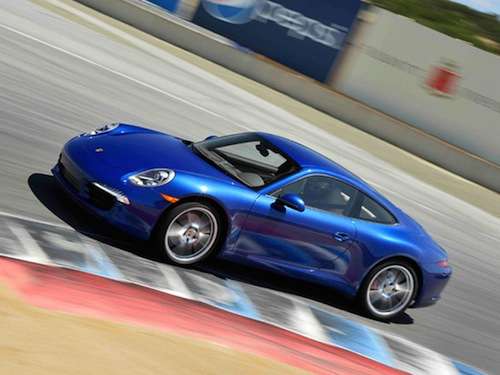 The new 2012 Porsche 911 Carrera S has been named the Best Driver’s Car for 2012 by Motor Trend.
Advertisement

It should not come as a surprise, but Motor Trend has chosen the new 2012 Porsche 911 Carrera S as the Best Driver’s Car for 2012. The award by MT is given to the car with the most engaging and rewarding driving experience. With track-ready performance the all-new 911 Carrera S is a good choice. The new-generation 2012 Porsche 911 has been completely redesigned from the ground up. Those who have driven the new car say it is sexy and creatively different than the outgoing model.

There are many muscle cars out there that will go fast in a straight line, and a few Japanese boy cars that deliver neck-snapping acceleration, but the Porsche 911 Carrera S is about delivering an overall satisfying driving experience and it delivers in a big way. But of course, that kind of a rewarding driving experience doesn’t come cheap. The 2012 911 Carrera S has an MSRP starting at $96,400.

The Carrera S uses 3.8-liter flat-six making 400 horsepower and 325 lb-ft of torque, with launch times of 0-60 mph in 4.3 seconds and a top speed of 188 mph. But that is just a small part of the story. The all-new Carrera S gets new technology that makes the ride even more engaging for the driver.

Porsche has updated the new-generation Carrera S with new technologies like a electro-hydraulic power steering system and the Porsche Dynamic Chassis Control active roll stabilization system. Porsche says the new system “enhances cornering performance by keeping the tires in their optimal position at all times while minimizing body roll.” Motor Trend must agree, because they have put the new Carrera at the top of their Best Driver’s Car list.

Other improvements include a weight reduction close to 100 pounds which also improves performance and handling. In addition to improved overall performance, the new 911 Carrera S benefits in the area of improved fuel mileage by as much as 16 percent. The outgoing base CarreraS delivered an EPA-estimated 19/26 city/highway mpg. The new more powerful 2012 Porsche 911 Carrera S model bumps that up to 20/27 mpg. Porsche has also introduced an industry first seven-speed manual on the 911.

Motor Trend editors took each contender through a battery of dynamic tests, a 500-mile road trip, and hard canyon driving on a closed course. To finish off the evaluation, professional driver Randy Pobst takes each car out on the Mazda Raceway Laguna Seca for a track test. Seven judges distilled the information and declared the 2012 Porsche 911 Carrera S the winner of the most engaging and rewarding driving experience. It looks like all the changes made to the new-Generation 911 Carrera S have made a big difference.

Tesla Contemplates A New Strategy for China Retail even As Sales Boom
Jay Leno on Elon Musk & EVs: “I Think He Should Get ... Credit"
END_OF_DOCUMENT_TOKEN_TO_BE_REPLACED