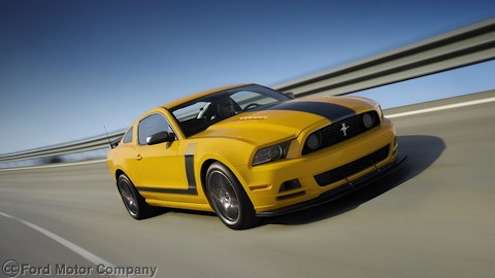 The 2013 Ford Mustang was the most-searched car last year and there are plenty of reasons why.
Advertisement

Many people do research on the cars they are interested in buying before they head to the dealer. Autoweek editors crunched the numbers to see which cars readers were most interested in last year and came up with a list of the 10 most-searched cars by their auto-enthusiast readers. The 2013 Ford Mustang was the number one car on the list and there are many reasons why. The Ford Mustang is an icon here in the U.S. and is about to make its global launch in 2015.

The Ford Mustang is offered in eleven models

The 2013 Ford Mustang is the most popular car for many reasons. It offers a two-door rear drive coupe that features many price points and options. The new 2013 Mustang is offered in 11 models, and can even be ordered as a convertible. And with the launch of the new 2013 Shelby GT500, it comes with as much as 662 horsepower. Ford has definitely got a winner on their hands and will soon offer it on a global scale.

The base V6 Mustang comes attractively priced at $22,200 and features a first-ever 305 horsepower 31 mpg powerplant with a standard six-speed transmission. The V6 base model can also be ordered as a convertible for under $28,000. The Premium V6 model gets a six-speed automatic and a number of other goodies like an upgraded Shaker audio system and Ford SYNC.

From V6 economy to powerful V8’s

A bump up to the Mustang GT ($30,750) gets buyers a 5.0-liter V8 engine which pumps out 420 horsepower. It also features the six-speed SelectShift automatic and comes with power-assist steering and LED sequential tail lamps. The V8 powerplant offers a bit more excitement over the V6 and gives drivers a true Mustang experience with a throaty exhaust note and extra power. The GT Premium ($34,750) gets buyers an extra level of comfort and extra technology. The GT Convertible ($35,750) offers top down fun with a level of performance that is unmatched by domestic brands.

Performance enthusiasts can order the Mustang Boss 302 which was born back in 1969 ($42,200) and is road-race ready for those wanting extra performance. A Boss 302 5.0-liter V8 engine producing 444 horsepower comes packed under the hood. The powerful 302 engine redlines at 7500 rpm and has neck-snapping power. It comes with unique Boss 302 striping, a rear spoiler and modified front fascia and splitter. It features a sport suspension that is built for serious results on the track.

The ultimate 2013 Ford Mustang is the legendary Shelby GT500 which comes as a coupe ($54,200) or a convertible ($59,200). The Shelby GT500 has been track-tested at over 200 mph and the supercharged aluminum-block 5.8-liter V8 pumps out a mind-numbing 662 horsepower. The new 2013 GT500 is so popular that it leads the industry and only stays on dealer lots 11 days. With the available SVT Track Pack, it’s race-worthy and ready for the track.

The new Mustang has something to offer everyone and is available for just about anyone’s budget. The iconic 2013 Ford Mustang is a big hit here in the U.S. and the all-new 2015 model is about to make its splash on a global level.