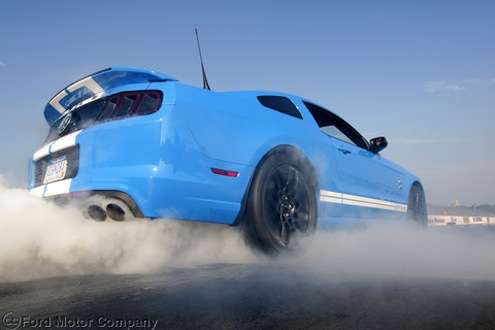 The iconic Ford Shelby GT500 is the fastest-selling car in America and dealers can’t keep them on their lots.
Advertisement

Some are saying that the days of the muscle car are over, but if you look at sales of the 2013 Ford Shelby GT500, the muscle car is alive and well. When you measure the popularity of a car, several factors tell us if the vehicle is doing well. Total sales in a year, most researched, market share and sales improvement year over year. But there is one factor that tells us more than any of these, and that’s how long the car sits on a dealer's lot. The auto manufacturing industry calls this measure “days to turn” or “time on lot.”

Edmunds.com has identified the days to turn data for November, 2012 and has identified the top ten vehicles sold in the U.S. that spend the shortest time on dealer lots. Edmunds also provided sales for these models for the first 11 months of sales for 2012. The 2013 Ford Shelby GT500 is tied for first place with the Ford Fusion Hybrid as the fastest moving car in 2012. Each car spent just 11 days days on the lot before it was purchased. The Shelby GT500 has a starting price of $54,200 and had total sales of 4,216 cars through November.

It’s no surprise that the car that is named after the legend Carroll Hall Shelby would be the fastest selling car in the U.S. The muscle car is one of the most sought after cars on the planet and collectors are paying record prices for the vintage supercars. Barrett-Jackson will be honoring the late Carroll Shelby and will also be auctioning off nearly 30 Shelby vintage automobiles at “No Reserve.” A rare '67 GT500 with just 9,841 original miles will be auctioned off at the upcoming event.

But the 2013 Shelby GT500 is the best one of all. The 2013 model is powered by a 5.8-liter supercharged V8 engine that pumps out 662 horsepower and 631 lb. ft. of torque. That makes the car the most powerful production V8 engine in North America. The 662 horses will propel the coupe to track speeds of more than 200 mph. In order to accomplish the increases in horsepower and top speeds, Ford updated the powertrain in order to make the V8 more powerful and also efficient.

Everything has been updated on the new GT500 starting with a larger and more efficient supercharger which forces more air into the 5.8-liter V8. Other improvements include new heads, an all-forged engine rotating assembly, updated camshaft, a new carbon fiber driveshaft and upgraded clutch, transmission and axle. Ford increase the cooling capacity with a new higher-efficiency intercooler to handle the extra heat created by the extra power.

Ford also upgraded the six-speed transmission with upgraded gears, bearings and housing to handle the increased torque. The final drive gear ratio has been changed to 3.31:1 and every gear besides fourth has been optimized to increase performance. In order to stop the 3,852-pound machine, Ford has upgraded the brakes with Brembo six-piston calipers and larger 380-millimeter rotors up front, and 350-millimeter rotors in the rear.

In addition to the fastest selling 2013 Ford Shelby GT500 and Ford Fusion Hybrid (11 days), Edmunds says the Mercedes-Benz G-Class was next with (14 days) to turn. They were followed by the Scion FR-S and Kia Soul both at (15 days), Hyundai Genesis Coupe (16 days), BMW M6 and Ford C-MAX Hybrid both at (17 days), and Mercedes-Benz M-Class and Subaru BRZ both at (18 days).

The new 2013 Shelby GT500 is selling fast for a reason, Ford has designed and built a supercar that has one of the most advanced V8 engines on the planet that has been recognized as one of the 10 Best Engines by WardsAuto World. It features Carroll Shelby and the SVT Team’s best work to date and buyers recognize the value. It’s sure to be a car that will go up in value as the years go by.