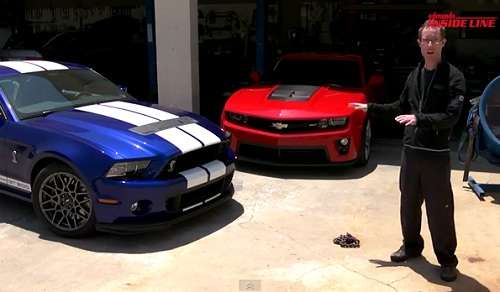 The 2013 Chevrolet Camaro ZL1 goes against the 2013 Ford Shelby GT500 in a dyno test.
Advertisement

Two of the most iconic muscle cars in America are the 2013 Camaro ZL1 and the 2013 Ford Shelby GT500. Inside Line wanted to see how the two would test out on the dyno on the same machine, by the same technician on the same day. So the team took the cars to MD Automotive in Westminster, California to see what the results would be. Lets first take a look at the two muscle cars and see how they compare on paper.

The most powerful production Camaro in history made its North American debut at the 2011 LA Auto Show. Powering this rear-wheel-drive muscle car is a supercharged 6.2-liter V-8 that cranks out 580 horsepower and 556 pound-feet of torque, which Chevy says is good for zero-to-60 mph in 3.9 seconds. Top speed is 180 mph with the 6-speed manual transmission, and, according to GM, 184 mph with the optional 6-speed automatic.

The ZL1 has plenty of race-ready goodies, such as launch control (on manual gearboxes) and large Brembo brakes. Multiple cooling systems such as a rear-differential cooler, an integrated engine- and transmission-oil cooler, and brake-cooling ducts help to diffuse all the heat developed on the track.

We’ve reported here that the 2013 Ford Shelby GT500 comes with a 5.8-liter supercharged V-8 engine that pumps out 662 horsepower and 631 lb. ft. of torque. That makes the car the most powerful production V-8 engine in North America. Ford tells us that the 662 horses will propel the coupe to track speeds of more than 200 mph.

The 2013 model gets plenty of upgrades from the previous generation model starting with a larger and more efficient supercharger which forces more air into the 5.8-liter V-8. The supercharger design spins faster, the inlet volume has been increased, and the boost has been cranked up from 9 to 14 psi. Ford uses a new Twin Vortices Series 2300 blower that creates 2.3 liters of displacement and is a unique design to the engine.

Other improvements include new cross-drilled block and heads, an all-forged engine rotating assembly, updated camshaft profiles, upgraded head gaskets, a new carbon fiber driveshaft and upgraded clutch, transmission and axle. And with all that extra heat generated from the new supercharger, Ford has to increase the cooling capacity with a new higher-efficiency intercooler to cool the air going in.

On paper the dyno results should have the Shelby GT500 on top by 82 horsepower and 75 lb-ft. of torque. From the dyno test on this day, the Camaro posted 497 hp and 497 lb-ft, which is the kind of driveline losses expected at the wheels. The Shelby GT500 responded by posting 595 hp and 603 lb-ft. That leaves a larger than expected gap of 98-horsepower to the ZL1, and loses a little more torque percentage wise.

While either car would be a great muscle car to own, the 2013 Ford Shelby GT500 is a vehicle that offers a complete package for street and track and offers outstanding performance. It's good to know that the performance car wars are alive and well.

Check out the video below.

Image source of 2013 Shelby GT500 and 2013 Camaro ZL1 screenshot from the accompanying video.

Anonymous wrote on June 7, 2012 - 7:23pm Permalink
ok we've seen the dyno #s,we've seen gm's #s [lol] and motortrends #s now put them on a track side-by-side and run them or is gm going to refuse to release a test car like they did with the 2011 ss or are they going to stick with compairing the zl1 to the boss and the gt500 to the zr1. [FORD the little mans superhero] ,gm's sticking it to the taxpayers and ford is sticking it to gm, Ford; built and raced without my tax dollars.
Anonymous wrote on June 15, 2012 - 7:14pm Permalink
boy the gm fagboys are staying away from this article

LG's New EV Battery Plant Is a Welcome News for Tesla
Tesla Giga Berlin's New Hurdle: It's Not Only the Gov't, but Now Tesla Itself
END_OF_DOCUMENT_TOKEN_TO_BE_REPLACED