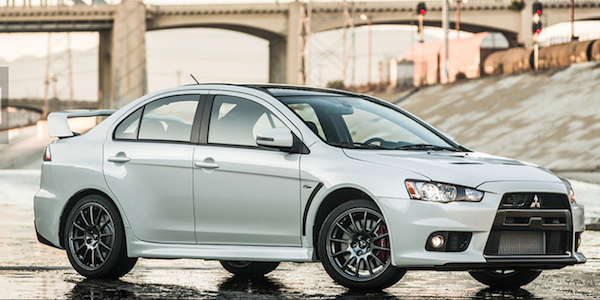 10 Things You Won’t Miss About the Mitsubishi Lancer Evolution

The Mitsubishi Lancer Evolution era is coming to an end. It’s an icon, but there’s a few things fans won’t miss.
Advertisement

With the last 2015 Mitsubishi Lancer Evolution Final Edition US#1600 sold, the iconic performance sedan’s era is coming to a close. While the EVO is the most popular all-wheel-drive rally machine to ever be produced, there’s a few things EVO fans won’t miss. Here’s 10 things some fans have said they won’t be missing.

The Mitsubishi Lancer Evolution has only been offered in a sedan body style, but some fans have said a hatchback model would have been a big hit. The sedan doesn’t offer the utility of a 5-Door hatch. When Subaru produced theirs, it was a popular model with 50 percent of sales going to the hatch. Mitsubishi never offered the EVO in this unique body style.

While the EVO X’s exterior styling still looks good, it hadn’t been updated since it launched the new-generation in 2008. The model ran from 2008-2015 with no real styling updates. Most automakers do a mild refresh after 2-3 years with a major overhaul after 5 years. But EVO had nothing for 8 years. Mitsubishi knew they were pulling the plug on the performance model and didn’t want to waste resources on a car they would axe.

Mitsubishi lists the fuel mileage for the Evolution at 17/23 city/highway. These aren’t real world numbers and when you drive the EVO like it’s intended, you will get a lot less. If you have a longer commute, it will drain your wallet. Yes, you don’t buy a performance vehicle for the fuel mileage, you buy it for performance. But if you’ve got a small family, it can make a difference, especially when you need premium unleaded.

Mitsubishi didn’t spend much on quality paint for the Lancer Evolution. It looks great when you drive it off the lot, but wait a a year and it begins to loose its luster. The exterior paint also chips easily and the front bumper can look like you’ve been through a sand storm after a couple winters.

The Lancer Evolution 5-speed manual rower is good, but 6 speeds would be better. Subaru produces the WRX STI and even the WRX now with a 6-speed manual gearbox, why not Mitsubishi?

The USB port is located in the glovebox

When you look for for the USB port on the EVO, it’s nowhere to be found. Who would think to look in the glove box for the USB? That’s where Mitsubishi engineers decided to hide it. It’s inconvenient and should have been put in plain sight and easy to reach. More on Page 2.

It’s got a small truck

We know why Mitsubishi gave the Evolution a small truck. It’s so there’s more legroom for passengers in the back seat. Open up the truck of the EVO and it’s small and there’s not much room for stuff. You have to use your backseat for cargo and that’s not cool if you’ve got passengers. It’s another reason Mitsubishi should have built the hatch.

No height adjustment on the Recaros

The number one reason why you won’t miss the Lancer Evolution, is because the 2015 Mitsubishi Lancer Evolution doesn't come with Ricaro performance seats. It gets the stock Lancer seats that are trash. The reason is due to an airbag requirement in the new model sedans. It’s another reason to keep your 2014 EVO.

Int X wrote on October 7, 2016 - 9:31am Permalink
Haha I totally agree with most of this list, I know, I own one. But the reason for the small truck is for weight balancing; the battery, windshield washer fluid, S-AWC pump and subwoofer are all in the back between the seat and truck. In the Lancer there is only the sub and the seats can go down and therefore the trunk is much bigger. And, the Racaro seats did actually exist in the 2015 MY for almost all Evo's sold, just not the US models. Canada, Europe, Australia and Japan at least all still retainned the Racaro's.
EC wrote on October 7, 2016 - 9:59am Permalink
A small truck? Is truck another way to say trunk?
RallyBred wrote on October 7, 2016 - 8:46pm Permalink
It's articles like this that made mitsubishi realize that the Evo just isn't for Americans. We didn't get the evo 1-7 and we got dumbed-down versions of the 8 and 9. Rally. Cars. Are. Bare. Minimum. Cars. I wish people knew that. Thats why Mitsubishi will always be better than Subaru. No cruise control, no heated seats, no comfortable "telescoping steering wheel" just you and the road.