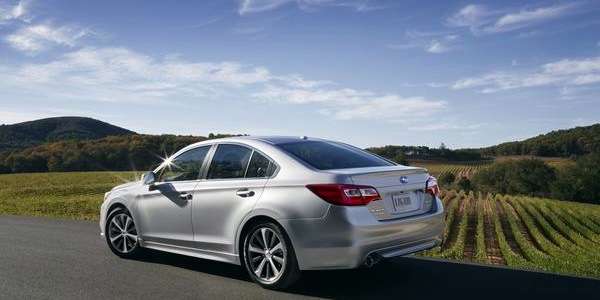 The 2015 Subaru Legacy sedan is the safest mid-size sedan on the planet. How did Subaru accomplish this?
Advertisement

The new 2015 Subaru Legacy will challenge all mid-size cars because of one very important safety feature. It’s called EyeSight and Fuji Heavy Industries, the maker of Subaru cars, has come up with a safety system that has the competition scrambling to catch up. When you think of safety, Volvo and Mercedes have been the leaders in the industry, until now. Subaru’s EyeSight is available on the 2015 Legacy at a fraction of its rivals cost. But there's much more to EyeSight than just the cost.

Subaru’s goal is simple but not easy to achieve. Subaru wants EyeSight to launch them into being the undisputed market leader for passenger and pedestrian safety by the year 2020. Their new-generation EyeSight safety system is the reason why.

How does the system work on the new 2015 Legacy?

EyeSight driver-assist system in the all-new 2015 Subaru Legacy puts the driver at ease with more convenience and greater protection. The new-generation EyeSight system is effective in preventing vehicle mishaps and especially driver distracted errors. Subaru continues to enhance its driving assist technology "EyeSight" which is based on recognition abilities using a stereo camera system. The system processes the images gained from its stereo camera and recognizes the object before an accident occurs.

EyeSight gets the highest rating from IIHS

The emergency braking system on the 2015 Legacy is particularly worthy of note. Instead of slamming the brakes on at the last second, Eyesight is already slowing the car the moment an obstacle is detected. This can not only ease the impact, but it can stop the car before it hits the stopped car in front. It's even been engineered to override the driver's braking inputs if the car deems the force you've applied is too little, or too late.

Subaru reports that 50 percent of EyeSight buyers have admitted that the safety system has prevented them from having a collision. Subaru’s accident rate for new registrations has halved since its arrival. Subaru’s goal is not to sell more 2015 Legacy sedans than Toyota, Honda or Nissan, but it’s goal is to have the safest mid-size sedan on the planet. Subaru stands a good chance of being the undisputed market leader for passenger and pedestrian safety by the year 2020. The all-new 2015 Subaru Legacy equipped with the new-generation EyeSight will challenge all mid-size cars because of this very important safety feature.