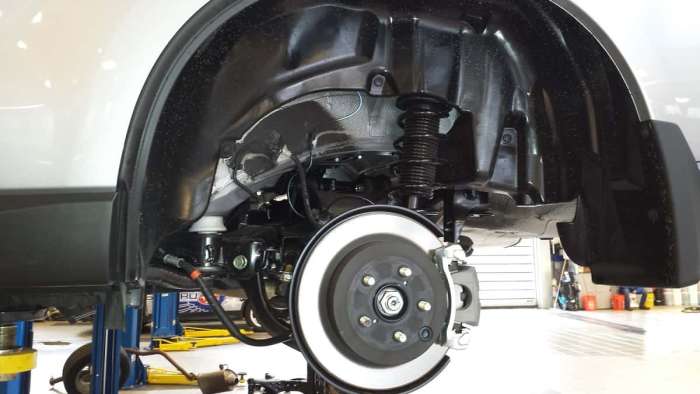 Why You Need New Brake Rotors When You Change Brake Pads

No, your mechanic is not trying to cheat you. Here’s why professional shops of all sizes now include new rotors with a “brake job.”
Advertisement

New brakes for daily drivers are never a fun maintenance or repair. The best one can hope for is that the car will stop just like it did before the brakes were worn out. In the past, the typical way to do a “brake job” on a vehicle with disc brakes was to machine the old rotors flat as part of the job. The result of this is that your bill would include labor and pads. If you have recently had a mechanic do a brake job on your car, crossover, or truck, you may be surprised to see that new rotors (discs) were included. No, you were not taken advantage of. In fact, quite the opposite.

It’s Less Expensive To Change Rotors Than Machine Them
The reason that mechanics began to swap out old rotors for new is pricing. Machining a rotor requires special tools and shop time. With aftermarket rotors dropping in cost below the cost of this shop time and tool costs, it became more sensible to simply swap them.

It’s Not Possible To Machine Rotors Indefinitely
If rotors were always able to be machined the change in culture may never have occurred. However, with weight being such a focus area of modern cars, manufacturers now make rotors as thin and lightweight as possible. Normal brake operation cuts grooves in the rotors and makes them thinner. Eventually, they cannot be safely machined anymore because they are too thin for proper braking duty. Mechanics began to find that this occurred more and more often on the first brake job. Brian Mushnick, the owner and mechanic at Brian’s Garage near Boston clarifies this point saying, “New rotors are produced at barely over minimum thickness. Any wear at all makes the rotors undersized and not eligible for turning.” Lightweighting has its costs as well as its benefits.

Mechanics’ Opinions On Changing Rotors
Torque News reached out to a few trusted mechanics to get their opinion of changing rotors rather than machining. Mark McMullen owner and mechanic at G&M Services west of Boston says for him, it became more cost-effective to swap the rotors. “We machined rotors back in the old days, but the labor cost and the costs we had to add to pay for the tool and its maintenance equaled the cost of new rotors.” Mark also explained why professionals don’t do half the job. He explained that a shadetree mechanic can simply swap out the pads and leave the rotors untouched. Mark says a pro won’t do that for many reasons, but one is that it often fails and the rotors warp shortly after the job or the brakes make noise.

Tom Daley of Daley Service in Norfolk, Mass. has been doing brake jobs for decades. At this modern shop, the old rotor turning machine is long gone. Tom explained, “Rotors are inexpensive and they are no longer made of high-quality steel. One brake pad life is all they are worth.”

The next time you have a brake job don’t be surprised to see rotors included on the work order. This is not a case of your mechanic trying to upsell you. Rather, it is the current best practice and also the most cost-effective way to do the job.

Mark Day wrote on December 13, 2020 - 3:41pm Permalink
Good info: “Rotors are inexpensive and they are no longer made of high-quality steel. One brake pad life is all they are worth.” If I knew my original equipment rotors were of "high-quality steel" I wouldn't replace them with single-use junk. Quality pads make a difference also, there are positive reviews regarding Akebono pads.