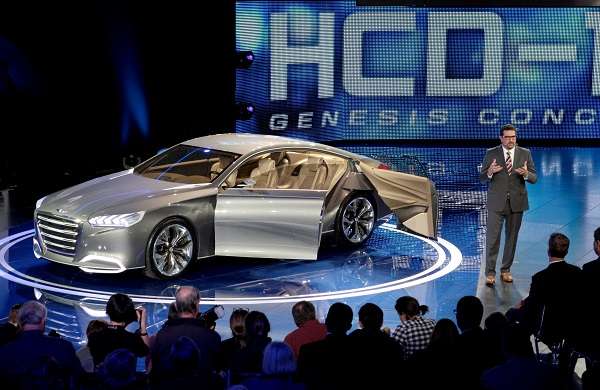 The Hyundai HCD-14 is a beautiful, bold vehicle design, but in today's automotive world it cannot be produced.
Advertisement

Hyundai is a company comfortable with bold styling and the new HCD-14 Concept vehicle is both bold and beautiful. All concept cars are works more for experimentation and development than for production, but the HCD-14 breaks so many rules it bears close scrutiny to determine if we will ever see a car like this from Hyundai. The car is to be shown at Pebble Beach soon and will surely be a hit there.

As we mentioned in our prior review the main goal of the HCD-14 is to study ergonomics and man-machine interface options for future models. In this, the car is a good showcase of the possible features we might someday see in a production car. However, it bears mentioning that the cars that have been the most bold with infotainment and other driver controls have suffered as a consequence. Ford in particular, but other automakers as well, have had their J.D. Power rankings drop due to customer frustration with new voice command and touch screen infotainment and HVAC controls. The 3-D gesture controls may indeed be a revolutionary change for the better, but Hyundai had better be sure that the target customer base is ready to try new things. What recent developments have shown is that in general, the driving public is not ready. On the flip side, we need to face the reality that the older drivers (who respond to surveys in great number) are slowly but surely being replaced with younger drivers who know what a gesture controller is (thanks to Wii and X-Box) and in fact, know how to program and use one.

Of the chassis design, we can only wish that such a design could be sold in the US. The defining feature of the HCD-14 is that it is a swoopy coupe design with four doors. Looking at the vehicle from the side we can see that there is no B-pillar. That is the structural support that contributes almost all of the occupant protection from side-impact vehicle intrusion. It is also the secondary contributor to the new roof crush test. Without a B-pillar a modern car, mass produced for passenger car duty, cannot really be produced. The only real examples of these left now are convertible hard-top coupes like the Lexus IS-350C and the BMW and Infiniti versions of the same type of car. As convertibles with hard-tops they escape the side impact and roof crush tests in some sense. They are not expected to do as well as typical passenger cars.

The suicide style rear doors which hinge from the back will also not succeed. There isn’t really a safety issue they cannot overcome, but having been burdened with that nickname ever since the Lincoln Continental of the 1950s, the cars are litigation magnets. Hyundai could make the doors hinge that way, but if there is a B-pillar it loses its appeal because the B-pillar takes much off the cool look away then all the doors are open.

Like all concepts the ginormous wheels that sap fuel efficiency and increase cost dramatically will also be downsized to 19” or maybe 20” rims, but certainly not the big rollers in the prototype. The rest of the car does still look fantastic, but Hyundai does not really break any new ground in the body style.

Toyota's First EV Will Have a Name of BZ: Toyota BZ
First Videos From Inside The Boring Company's Las Vegas Loop
END_OF_DOCUMENT_TOKEN_TO_BE_REPLACED