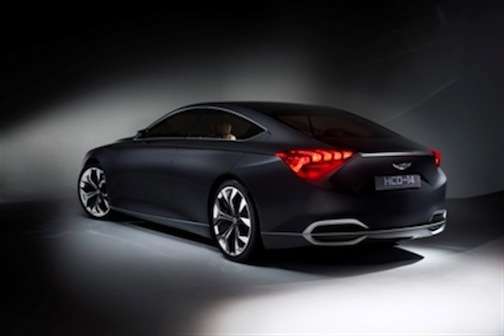 Why the Hyundai HCD-14 Genesis Concept will transform premium vehicles

The Hyundai HCD-14 Genesis Concept points to the future of all premium brands. Hyundai has moved from producing entry-level cars to being one of the most significant automakers on the planet.
Advertisement

If you want to see the future of premium luxury cars, look no further than the Hyundai HCD-14 Genesis Concept car. It's much more than just another concept car the South Korean automaker brought to Detroit earlier this year. It is one of the most significant cars of this decade, and has been recognized as the 2013 “Concept Car of the Year” at the twelfth annual North American Concept Vehicle of the Year Awards. The HCD-14 beat out competitors in the “Concept Car” category including the Honda EV-STER and Toyota Corolla Furia. What makes this car so significant?

The award recognizes those vehicles that will most likely shape the future of the automobile industry. This concept vehicle will shape the cars that all of us will be driving in the near future. According to juror Bob Kroupa, one of the principals of the Automotive Writers Group, “Hyundai’s HCD-14 introduces future premium vehicle design, advanced 3-D gesture-based technology controls and spirited driving dynamics. Its rear hinged back doors and fastback coupe design, add to the WOW factor.”

HCD-14 Genesis points to the future

The HCD-14 Genesis has more than just a great exterior design, but it reveals the technological future of Hyundai’s premium line-up with new technology that will be coming to the premium brands. It features driver eye-tracking and hand-gesture recognition, thumb controls or gesture recognition used to select navigation, infotainment, audio, HVAC, and smartphone connectivity functions. These will all be technological advancements we will see in future luxury cars from Hyundai and other automakers.

We can look for Hyundai to continue to move into developing more premium luxury vehicles in the future. They will need to do this so they can compete in the premium luxury segment and be considered a global player. The South Korean automaker had global aspirations and a business philosophy that comes down to three words, “defy, design, delight.” Look for Hyundai to break conventional wisdom and do things different than most automakers.

Hyundai is already developing some of the fastest cars in the world with their racing programs like the 2013 Genesis Coupe that set a new world record run to the summit of Pikes Peak. This will allow the automaker to gain valuable insights into driving dynamics that will filter down to future production vehicles. Chris Chapman, chief designer, Hyundai Design, North American Design Center said, “HCD-14 Genesis provides a glimpse of Hyundai’s future and showcases the emphasis we are placing on driving dynamics and technology. Winning the ‘Concept Car of the Year’ validates our design intuition as we take our premium line-up to the next level of sophistication in styling and technological prowess.”