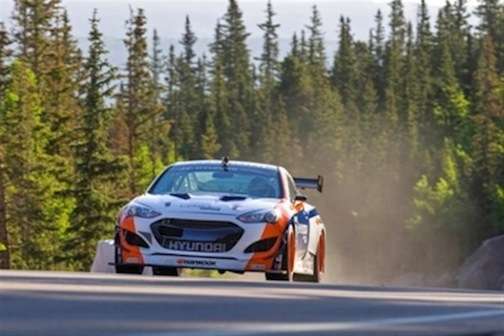 The Hyundai Genesis Coupe has done it again this year by setting a new world record run to the summit of Pikes Peak.
Advertisement

Records are meant to be broken, and Paul Dallenbach has shattered the old world record at Pikes Peak in the Time Attack Class set by the same car last year. The Hyundai RMR Genesis Coupe driven by Dallenbach set a blistering pace to the top of the 14,115 foot summit in only 9:46.001. This broke last years record set by teammate Rhys Millen. But the Genesis Coupe isn’t exactly the same car that set the world record last year.

This year, the car received a few strategic upgrades to quicken its pace. It got a new clutch-type rear differential to help reduce inside wheel spin in the tight hairpin turns up to the summit of Pikes Peak. The team saw they could improve those turns with extreme crown affecting corner-exit acceleration.

Paul Dallenbach is a veteran Pikes Peak racer with an impressive resume on the Colorado mountain. He has six Pikes Peak class wins and three overall wins at the world’s most prestigious hill climb. After the race, Dallenbach said, “The Rhys Millen Racing-prepared Genesis Coupe really complemented my aggressive driving style in setting the Time Attack world record.”

The team didn’t rely on success from last year, but set out to make the car even better. And Dallenbach’s experience on the mountain didn’t hurt a bit. He went on to say, “With some very specific adjustments to the car this year giving a more neutral handling balance, I was able to even build upon last year’s world record set by Millen. It was thrilling to drive a racer that made full use of my years of experience at Pikes Peak.”

The second-oldest motorsports race in America got a new look last year when the famous race course was fully paved for the first time. Before last year, it took 95 years for a driver to break the once allusive 10 minute barrier. Now it will be interesting to see how long it takes to break 9 minutes. Until then, Dallenbach and the Hyundai RMR Genesis Coupe holds the world record time of 9:46.001.