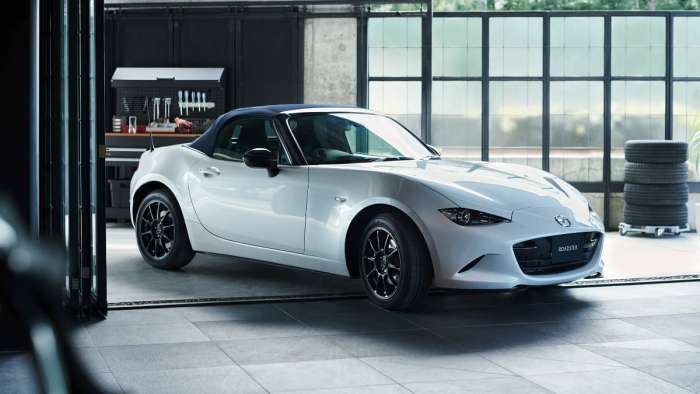 Here’s why the special lightweight 990S Roadster offered only in Japan is not what most American Miata buyers would want.
Advertisement

Mazda is offering a new lightweight 2022 Roadster 990S trim in the Japanese market. Saying “lightweight” to a Miata fan is like saying “squirrel” to a dog. Therefore, many publications have highlighted the innate awesomeness of having a Miata a.k.a. Roadster that is lighter - even though they haven't driven it. If it is lighter it must mean that it is more fun to drive and faster, right? Wrong. At least in this case.

Related Story: Why One Vehicle Tester Thinks The Mazda Miata Is The Best Dream Car In The World

Back in the day when the American-market Mazda transitioned to the NC (third-generation) Miatas, the NA and NB Miata owners were dismayed their cars were no longer the best Miatas, and thus some were set to dismiss the NC. They pointed at it and said things equivalent to a bully saying “fat kid!” The trouble was, that "fat kid" was faster, safer, and better at pretty much everything a new Miata buyer wanted.

The ND continued Mazda’s improvements to the model, making it even quicker than the NC. The 2022 Miata is still an ND (fourth-Gen). The U.S. Miata has been updated a few times in meaningful ways since the 2016, but the chassis and most of the running gear are the same. There was an engine improvement a few years back. The biggest difference between the U.S.-market Miata and the Japanese-market Roadster is the engine. In the U.S. Miata, we get a 2.0-liter engine with 181 hp. The Japanese market Roadster has a 1.5-liter engine which creates just 130 hp (97 kW). Fifty-one horsepower is a massive difference in a sportscar that is already underpowered by most yardsticks.

Related Story: Mazda MX-5 Miata Has A 3-Year Repair and Maint. Cost About Half That of EVs

Mazda has reportedly said (not to us) that the ways it shaved about 160 pounds off the Japanese-market Roadster are not possible for the U.S.-market Miata. In a nutshell, Mazda sourced lighter wheels and brakes, took out some sound foam, deleted the good audio system, and fitted a lighter hood. Mazda also doesn’t offer the lighter Roadster with a limited-slip differential. If you own a Miata, and if you have the 181 hp engine, trust this past and future Miata owner, you want the limited-slip Diff.

In a nutshell, the Japanese market 990S Miata (Roadster) will remain a slower car than the U.S. Miata with much less power and without a limited-slip Diff, but will be lighter by about the weight of a medium-sized passenger.

Tell us in the comments below if you would prefer the lower-powered, open-Diff car with its lighter weight, or the faster car we get in the U.S. Your opinion is valued, regardless of which you prefer.

Roger wrote on December 31, 2021 - 10:32am Permalink
Don't know what Mazda engineers are thinking. What would be the attraction of eliminating that much performance over saving 160 lbs? Another crazy Mazda engineering blunder like the Renesis Rotary Engine. I have owned quite a few Mazda vehicles starting with a 1972 RX-2 which was a great first gen rotary engine vehicle which lead me to later trust in owning a 2003 RX-8 which was one of the worst cars I have ever owned based on its redesigned Renesis Rotary Engine powertrain issues. I currently have a 1995 NA Miata that I still love to drive but have apprehensions in moving away from the bullet proof 1.6/1.8L engines of the old NA/NB models and into the newer NC/ND powertrains based on my previous Mazda RX model powertrain experience.
Alex Wilson wrote on January 11, 2022 - 9:16am Permalink
Owned an ND1 with open diff and now own an ND2 with LSD. Why would you want the lighter weight for more performance, but then not want the performance diff? I understand the concept of reving the heck out of the 1.5 being fun. In the ND2 2.0 liter, if you start reving the heck out of it, you end up getting into speeds that get you in trouble. The 2.0 is getting on the border of getting beyond the "slow car fast" fun factor, as it is getting kind of fast itself.