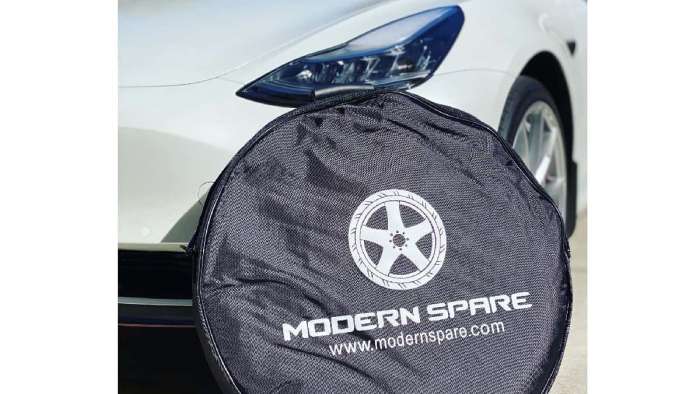 Your automaker opted to save a few bucks and steal your spare tire. The solution to this problem is Modern Spare.
Advertisement

As green vehicles slowly take over from mainstream vehicles, Automakers are eliminating spare tires. For example, you won’t find a spare tire in the Honda CR-V Hybrid, though Honda felt a spare was important for all of the other trims of that vehicle. Nor will you find a spare tire in a Ford Mustang Mach-E, yet, every F-150 has one. A company called Modern Spare is filling in the gap in safety and convenience your automaker has left.

Related Story: Why You Really Do Need A Spare Tire - Particularly In Light of COVID-19 Changes

Modern Spare was started nearly five years ago by a Corvette owner and club member. He realized that modern Corvettes had no spare tire and that the owners who went on long tours on weekends far from home, could be in a pickle if they damaged a tire. Since the 'Vette has always used cutting-edge, large-diameter, low-profile tires, finding an in-stock replacement locally was never really an option for these owners. Making matters worse, when a group of owners held an event and traveled together, one flat could ruin the day for all the members. 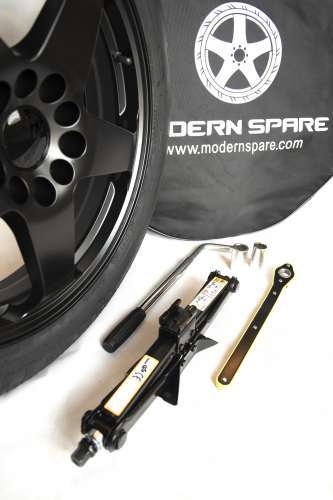 From this inspiration, a company was born. Modern Spare now offers spare tire kits for over 100 models. The kits generally cost between $300 and $350, and they come with all of the things your automaker stole from you. A spare tire, the tools and jack, and other small bits needed to replace your damaged tire when on the go are included. The kits also have a nifty carrying case to keep it all neat. Kits for some models even have the retaining hardware to hold it in place in your vehicle’s spare tire well under the cargo floor. To make the kit lighter than a typical automaker's spare, Modern Spare uses an aluminum alloy rim. 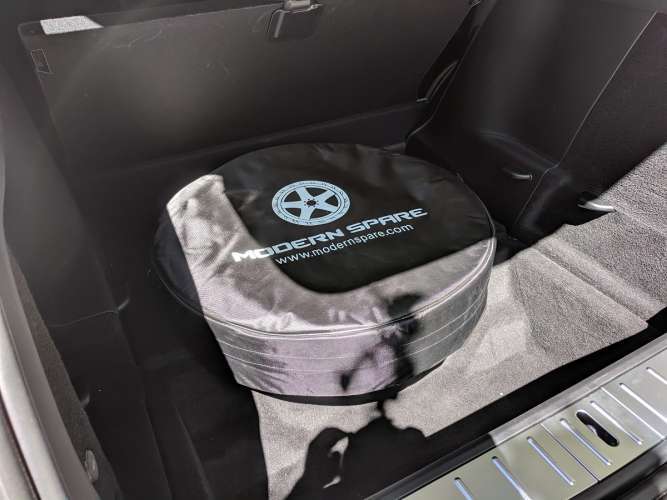 We spoke with Modern Spare, who told us that Tesla owners have become one of the company’s regular buyers. The representative we spoke with pointed out that Tesla owners tend to be vehicle owners that plan ahead. They are conditioned to plan for charging, and the Tesla infotainment system is all about plotting out the steps to come on a road trip. Since no Tesla vehicle comes with a spare, and since the Tesla forums are packed with owners complaining about having to be towed when they get a flat, the word spread quickly in the Tesla community that Modern Spare can be the solution to the problem Tesla created when it omitted the spare tire in their vehicles.

Related Story: We put BMW run-flat tires to the test and give them a thumbs-down

Other key customer groups include European brands like Mercedes and BMW. Many owners of these vehicles despise the run-flat tires that their vehicles come with and swap them out for conventional tires and a Modern Spare when the run-flats wear out. This saves significant amounts of money and the choices of tires are much larger in the non-run flat world. 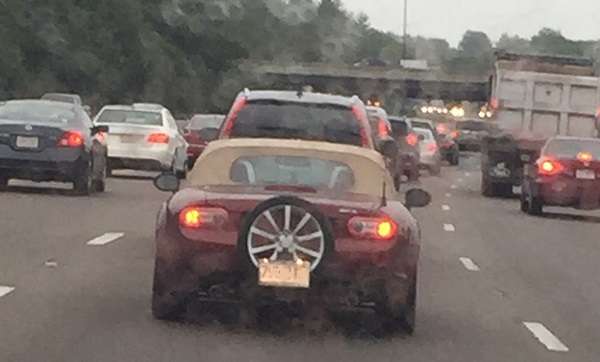 Not every car has a perfect place for a spare tire. The Miata, in particular, is poorly designed to accommodate a spare tire in the small trunk. Interestingly. The all-new Corvette is also designed without a reasonable place to put a spare. To our surprise, Modern Spare says that they still get orders from owners of such vehicles. They keep the spare in their garage with the plan that if they need it, they will retrieve it or have a family member bring it, rather than risk having their special car towed.

Related Story: How To Plan For A Flat Tire In a Mazda Miata or Fiat 124 Spider

You can learn more about Modern Spare at the company’s website. Torque News received no discounts, free products, or revenue from Modern Spare for the publication of this story.

Timothy Parker wrote on March 22, 2021 - 4:07pm Permalink
Unfortunately, their spare tires are just that. They are not the compact inflatable spare tires designed to be super compact and sufficient for an emergency situation that would weight little and fit in small spaces. That is the type that many EV owners would really like to have.
DeanMcManis wrote on March 24, 2021 - 3:07am Permalink
It looks like a universal space saver rim and tire. It sounds fine for the purpose intended, like going on a long trip without luggage. But I wouldn't trade off trunk space for a spare tire in daily driving.
JohnIL wrote on May 12, 2021 - 8:28am Permalink
I don't believe a spare tire affects fuel millage that much. I think its more car makers realized the inflation kit costs less then a spare tire and jack. Kicker is that many vehicles don't still have a space for the spare even if you bought one. I bought a Ford EcoSport and the only option for a spare is buy a bracket to attach to back. trouble with inflators and sealer is that many times the damage is too much for a sealer to even work, or that the tire went flat quickly and caused too much sidewall damage. So I guess many will find out that you have two choices, tow the vehicle to get tire fixed, have a service come out and replace tire. Either way that's going to take more time then simply changing a tire yourself. Seems like automakers decided for you that you can't handle changing a tire anymore and they can save a few bucks per car to not include one. Here's a inflator kit if you want to waste your time.
John Goreham wrote on May 12, 2021 - 10:48am Permalink
Spot on JohnIL. I live in the Northeast. The idea that a can of gunk and a pump is the resolution to a flat in winter is laughable. And no inflator system will ever work for sidewall damage.
DeanMcManis wrote on May 14, 2021 - 12:39am Permalink
I leased a Chevy Volt and when it had about 700 miles on the car I caught a nail in the tire. The tire's air pressure sensors worked great and i was able to pull off the highway safely. Also the Onstar service was great as an operator popped on and asked if I was OK, and then ordered towing. But the car came with an air compressor with tire goop and I unfortunately used it and soon goop was all over the ground and the tire was still flat. Because the nail was in the tread the tire guy said that he could have easily and cheaply patched or plugged the nearly new tire, but I ended up having to buy a new tire for $170 because once gooped, the tire is usually not repairable. And that was the last time that I will use the goop inflation kit ever again. I have gotten many more nails in tires over the years and except for sidewall damaged tires, the rope/tar plugs have been a great and easy home tire repair, for me.
Gloria Johnson wrote on September 30, 2022 - 5:52pm Permalink
I need a spare for my 2022 IONIQ5. I don't mind using the cargo area for it, or storing it in the garage. However, I recently saw a car that had a round luggage rack on top. Pretty sure it had a spare tire in it. Do you know where I could get one of those installed?