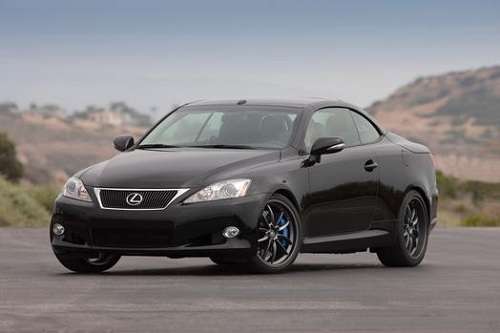 What would I buy right now? A Lexus IS350, an Acura RDX, and a Honda Accord Plug-In Hybrid

The most common question an automotive journalist will be asked is 'What car should I buy?" This is a loaded question, since our vehicles are not only an extension of ourselves, but also should fit exactly what our lifestyles and transportation requirements are.
Advertisement

Before you start writing me hate mail about being an elitist scum, please read a little further. My everyday car is an IS350 variant I bought pre-owned. I think the car is underrated and that a case can be made for it as a relatively affordable car because it fills two roles. First, it is an excellent 2 + 3 seat sedan, or 2+2 coupe, that gets real world mileage of about 24 mpg overall. On the highway it can get near 30 mpg. That is not great, but read on. I consider the IS350 to be a combination of sports car, family sedan, and luxury car. It is a good looking car too which makes it a nice date-night car. By owning this rear-drive, 306 hp car with paddle shifters, one can effectively drop whatever sports car they might have had as a second car. Before my IS350 I had a ’07 Miata and this car is a much more capable on-road sports car than that car was. As a Lexus sedan it also has a low cost for insurance relative to other cars at the price point and it holds its value well. Therefore, I argue that this car can take the place of say a Mustang and a Camry, or a Miata and Ford Fusion. It is even available as a hard-top convertible if you want a bald-spot tanner.

I would try to buy this car now too because the all new 2013 IS350 is coming, thus, dealers might be very interested in moving their inventory to avoid having both models on the lot. Also, there may be some great certified pre-owned deals as owners of IS models come in to move up to the new, larger IS. The IS is not a pure sports car. However, it does go from 0-60 mph in about 5.2 seconds and it is rear drive. The car does everything very well except steer, but that is an ailment for our times as every manufacturer has had to move to electric steering. Even the new Corvette, BMW 3 Series, and all the Porsche models.

Utility Vehicle Acura RDX
I would consider this section, “what would I buy if I had to live with just one vehicle?” My choice would be a vehicle that has good cargo space, can seat 5 very comfortably, and is also relatively fun to drive and somewhat safe, because my kids would be in it. For me that car is the Acura RDX. I like the V6 power, high up driving position the crossover offers, all-wheel drive for winters and the price point. At $40K this car has the content I want, but not more than I want. Here in New England I have sworn never to own only a sedan again. That is because it is unsafe. The last few winters the snow banks at the end of the streets have been higher than the windows in a sedan like an Accord, but not higher than the windows in my ’07 Highlander. So I can see around corners and sedan drivers cannot. Thus, if I have to own only one car it must be a crossover with good driver’s seat height. I consider anything else unsafe in winter.

The RDX is also fuel efficient. Compare its 27 MPG in all-wheel drive and you will see it is close to the new 4 cylinder Toyota RAV4, 4-cylinder (29 mpg) and stomps on the new Hyundai Santa Fe Sport turbo’s 24 mpg. And it is faster than both.

Green Car Honda Accord Plug-In Hybrid
Like Patrick Rall, TN’s editor, I am also not a “green-car” guy. However, I do recognize that there are some folks who are for philosophical reasons, and I realize that in certain applications, taxis for example, low fuel consumption cars make good sense. Thinking it through, if I were in a situation where I was to be granted the green car of my choice, say as a car for making sales calls for example, I would select the Honda Accord Plug-In Hybrid (PIH).

I have owned two Honda Accords, a 2003 and a 2006. Both had the V6 and both were excellent cars for on the road selling, which is how I used them. During the time I owned those cars they were “Ten-Cent” cars. Meaning that the fuel they used cost less than ten cents per mile. The V6 Accord could then, and can now exceed 30 mpg on the highway in actual use, but this new PIH Accord has an EPA estimated 115 mpg equivalent! That is the best energy economy of any mid-full sized passenger car. In fact, when operated in full electric mode, which the Accord can do for about 13 miles or so, the car is 23% more energy efficient than a Tesla Model S (80kW-hr battery pack). Unlike the Model S, the Accord can also be fueled up anywhere in North America and has a range of 574 miles using both its liquid fuel and battery energy which would be great for sales calls in New England and beyond. When used as a hybrid the car gets 46 mpg combined, which is frankly an astounding efficiency for a 5 passenger car this big. This car will be a “ten-cent” car for the next decade.

The Accord PIH sold in America, like all Accords is built only in the US. Not Canada, not Mexico, in America. I like that. I don’t exclude imported cars (see above), but it is a buying consideration for me. The price is also quite nice. This Accord would only cost me (or my company) about $29,000, the same as a loaded Accord with the 4 cylinder. That is due in part to rebates from the Federal government, and the People’s Republic of Taxachussetts. Rebates which I hate. It kills me that these cars are subsidized with taxpayer dollars, but I am being told to pick a green-car, so there you have it. Finally, Accords are relatively reliable. Just a quick list of the parts that failed on my two Accords over about 100K miles are; the transmission, two struts, the exhaust system, the sunroof (shattered before that became popular), and various interior parts. So I figure with all those failures I am due to own an Accord trouble free due to the law of averages.

What do you think of these picks, Patrick’s, and Aaron’s? What would be your choices?

Click the writer's names below for a look at the cars that some other TorqueNews writers would buy:
Aaron Turpen - A Volkswagen, a Ram and a Toyota Hybrid
Patrick Rall - A Ford, a Jeep and an Electric Chevy

Aaron Turpen wrote on March 14, 2013 - 2:25pm Permalink
Good choices. The IS is available in convertible too. :) The RDX is assembled in Ohio, mostly from parts sourced here. The Lexus isn't the only one on your list that's an import, btw. The Accord Plug-in is built in Japan and imported and is currently only being sold in California and New York. The regular Accords are made here, but not the plug-in.
John Goreham wrote on March 14, 2013 - 4:35pm Permalink
Thank you. I didn't know that. I thought all Accords were made in the US now. Sneaky.
Aaron Turpen wrote on March 14, 2013 - 5:42pm Permalink
All but the PIH are. Toyota doesn't build any plug-ins in the U.S. yet either. They plan to start with the Prius next year, I was told by the rep, and likely will add others as the sales grow. Right now, they build so few of them that it's not worth the cost of adding them to new production lines. Honda is obviously in the same boat.
Jeff G wrote on March 15, 2013 - 9:33am Permalink
It's to bad that the younger folks can't see past there perceptions. If you buy these cars you will be sending about $20000.00 to Japan when the US needs it a lot more then Japan. Vehicles of this quality and cost are made and sold by US companies and the Consumer Report crowd need to look at the facts themselves.
John Goreham wrote on March 16, 2013 - 3:47pm Permalink
Hmm. One could try to substitute a Chrysler, but they make a lot of their cars in Canada, and they are owned by an Italian company. So that would be sending profits to Italy. One could substitute a GM product like the Camaro, built in Canada, but GM doesn't pay tax to the US on profits anymore, and GM builds more cars now in China than in the US, so I'm not sure how choosing them would be different than any other international brand building cars in the US. Ford (Lincoln) does not make rear drive luxury cars anymore, and Ford does not have a V6 powered compact crossover anymore, but the Fusion is certainly coming on strong in the green car area. Thanks for the chance to reflect.
DJT wrote on March 17, 2013 - 12:12am Permalink
Well that's unfortunate, but the Big 3 US missed the boat and alienated a generation of younger buyers who eventually figured out German and Japanese bands were just making better "product." It takes a long time to build up reputation and no amount of marketing of "eco-boost" is going to triumph brand loyalty and perception overnight. Besides, today most car companies are global and you have a right to share in the success of any of these companies by purchasing stock. Last time I checked, Honda (HMC) and Toyota (TM) were trading on the NYSE alongside Ford (F) and General Motors (GM).