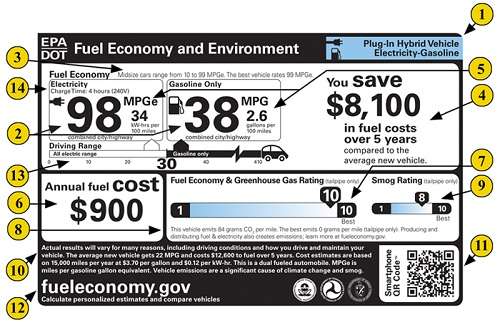 In EV mode plug-in hybrid vehicles are more efficient than some electric cars. The trend towards plug-in hybrids is steadily growing.
Advertisement

With so many new types of vehicles on the road, Torque News took a look at which are rated most efficient by EPA estimates. This article was inspired by research done on the selection of a green vehicle for the Torque News “What I would buy” series organized by Patrick Rall, Editor of Torque News. During the research it became apparent that not all electric cars have the same efficiency, that Plug-in-hybrids (PIH) can have better efficiency in some cases, and that size and shape of the vehicle is not really a good predictor of the car’s overall efficiency.

First we must define efficiency. Rather than recreate the wheel we will use the EPA’s definition. EPA realized that it needed to use some form of measurement to allow shoppers to determine how efficient an electric vehicle is. The efficiency model is selected was “miles per gallon equivalent.” Regardless of how the EPA defined efficiency there would be those that disliked the choice. MPGe has the benefit of being easily understood by shoppers used to miles per gallon. As an engineer, I have no preference for units. I would be just as happy with coulombs per furlong, as long as the values are accurately measured, and are consistent.

In order to understand how plug-in hybrid vehicles work it is important to first realize there is not just one type. There are really two. The first, are those that are designed to primarily be used as electric vehicles. The Chevy Volt defines this category and it really is the only one selling at this point. The second type of plug-in hybrid car is a car that is a hybrid, meaning it usually uses the gas engine, but augments that with electric drive. What makes the plug-in variants different is that they can hold enough electric charge in their batteries to get you to the shopping mall, get you to work (maybe), and allow you to do most of your weekend activities using only electric power. The Toyota Prius PIH, Honda Accord PIH, and many others are examples of this type of drive.

In contrast to these vehicles that offer some electric drive are the pure electric vehicles. These are cars that can only use electric drive. There is no gas engine on board. The Nissan Leaf and the Tesla Model S are the best examples of these types of cars. At this point we should stop and recognize that these are very, very rare automobiles. In a new car market like the US, which sees over 13 million new vehicles sold per year on average, there have only been about 30,000 of these cars in total sold to customers per year over the past few years. Before that there weren’t any models of any significant number being sold. Contrast this with the Ford F-150 which sells about 650,000 units each year and it gives you some perspective. However, green car advocates say that the electric car is about to explode in popularity and they are likely correct. If they are not correct, it won’t be gas powered cars that keep them from being popular, it will be the plug-in hybrids and hybrids, which are now selling in much larger numbers.

Hybrid technology is now so ubiquitous that some cars, and car makers have simply stopped mentioning it. Chevrolet and GM started this trend. They have been applying hybrid technology to many models and they don’t use the term hybrid at all. At the other end of the market, BMW now applies many hybrid derived technologies such as auto stop-start to almost all of its models. The best example of a hybrid technology that is now 100% adopted is electric steering. There will be no more hydraulic steering vehicles to come.

Now that we have looked closely at the offered groups of cars, let’s compare some cars and see how they do against one another. For our comparison we will rely upon FuelEconomy.gov and the manufacturer’s information, but only if the EPA information was actual, not projected. Also, it makes sense to balance the manufacturer’s information with another source since it can be sometimes a little deceiving. They tend to highlight their best mileage in the model range in their marketing information, and then provide the worst (but fastest, and longest range models) for testing to the car magazines and other automotive journalists.

Let’s first compare the Honda Accord PIH to its stable-mate, the all-electric Honda Fit EV. When driven as an electric car, for the 13 or so miles it can travel on its batteries, the Accord has an EPA estimated 115 MPGe. The car is a large, comfortable five passenger vehicle, with a large trunk. The Honda Fit EV by comparison is smaller, but still claims five passenger room and has a hatch-back design, so storage is possible as long as you don’t mind passers-by to see the items in the car (think laptop and purse). The Fit has an EPA estimated 118 MPGe. What happened? Why isn’t the Fit dramatically more fuel efficient?

Let’s now compare the Honda Accord PIH to the all-electric Tesla Model S. In this comparison we must choose which Model S to compare because there are multiple versions. We will select the most energy efficient model listed by fueleconomy.gov which has a 60 kw-hr battery pack. The Tesla has an energy efficiency score of 95 MPGe. These two cars could not be more alike. Both are 5 passenger sedans and have similar dimensions, though the Tesla is notably larger in width. Why would the Tesla score so much lower than the Accord? One clue is the battery capacity. The Tesla with the larger battery scores even lower on the MPGe scale at 89 MPGe. So we know that a change to the drive system can obviously change the efficiency. Aerodynamics and weight also play a role.

Clearly at this point the case can be made that the plug-in hybrids are coming on strong. The Prius PIH with a score of 95, the Chevy Volt with a score of 98 and the Nissan Leaf with a score of 99 MPGe are very close comparisons. Fans of electric only drive will cry foul and point out, correctly, that many PIH vehicles will burn significant amounts of gas. While that is true today, since the PIH vehicles (Volt aside) only go about 10 or 15 miles on electric drive, all batteries are progressing, slowly, but surely. It will not be long before the technology allows for a low cost PIH system to be applied to a more or less conventional car that will propel it 20 miles on electricity only. At that point it will start to become very difficult to claim an EV is more energy efficient in actual daily operation. Perhaps we will even see 20 mile EV ranges on cars such as Mustang GTs and Camaro SS muscle cars.