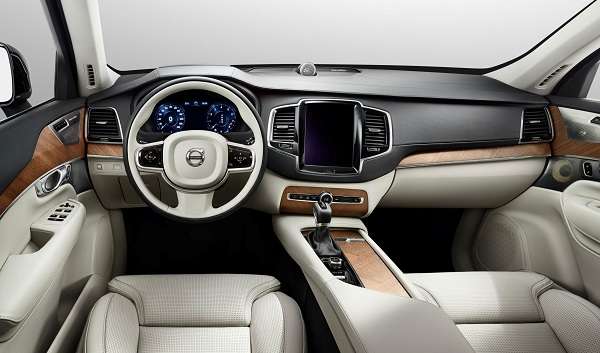 Volvo shows off its best interior ever in the 2015 XC90

Volvo reveals photos of its new 2015 XC90 SUV. The company is banking that Scandinavian interiors will make buyers forget its engines now have only four cylinders.
Advertisement

No vehicle is more important to Volvo’s future than its 2015 XC90 sport utility crossover. The XC90 will be all new for Volvo in the coming year. Today’s reveal of the interior of the vehicle kicks off Volvo’s six-month long introductory period for the new seven passenger family crossover.

The XC90 was the top-selling vehicle in the Volvo line from 2002 through 2009 in the US market. After 7 years in the marketplace its luster had worn off. The vehicle is way overdue for a complete makeover. Today’s release of the interior photos and detail shows that Volvo is serious about again making this 2015 XC90 its flagship. Volvo claims that the new XC90 will be most luxurious vehicle it has ever made. That is quite a statement given the excellent large sedans it has built in the past.

The 2015 Volvo XC90 will of course be styled as if the company was still owned by Swedes (rather than a Chinese conglomerate). That is a very good thing because besides that style, Volvo has literally nothing to make it stand out in the marketplace. The focus going forward for Volvo is to focus on many small things that will be appreciated by luxury shoppers. One good example of this is the transmission selection lever. Instead of plastic and metal it is crafted partly of crystal by Orrefors, a Swedish glass maker.

As the photos show the Scandinavian design is still the theme inside the 2015 XC90. Volvo points out that the stop-start button is diamond-cut. That small detail may be appreciated by a small part of the car-buying public, but niche marketing is what Volvo must be about to compete in the luxury SUV/crossover market. Thomas Ingenlath, senior vice president design of Volvo Cars says that “The most striking feature is a tablet-like touch screen control console, which forms the heart of an all-new in-car control system.” He may be right, and the tablet effect had better be real because Tesla is also about to launch a new luxury crossover this size and it indeed has a tablet glued to the front console. Tesla’s is bigger than a tablet in fact. It is more like a TV screen.

The XC90 for 2015 will again be a very spacious 7 passenger sport utility vehicle. Like most manufacturers the center row seating is really intended for two most of the time and can seat three if need arises. Unlike most manufacturers Volvo is smart to point out that its third row is designed to be comfortable for humans up to 5 foot, 7 inches in height. I love that Volvo put this small note in its press package about the XC90. One of my pet peeves is enjoying a review of a three row vehicle of any given size and reading the inexperienced author point out that the third row would be tight for tall adults. That row is for children and anyone with any sense who writes about cars should know that. Yet, The dumb comments persist. Bravo Volvo for heading off the silliness.

We will let the reader make their own mind up about whether this new interior is at a luxury level that will beat Audi, Lexus, BMW, and Mercedes. It is a matter of taste to some degree. What we will not hold back on is our commentary about Volvo’s engine for the new crosover expected to cost between $60,000 and $90,000 dollars. Volvo has promised that going forward it will only offer four cylinder engines. We can’t wait to see how that few cylinders will match up against the 6 and 8 cylinder turbos its competitors offer, many of which will be hybrids, and more importantly, how it will stack up against a Tesla’s Model X with about 400 ft-lbs of smooth electric torque.