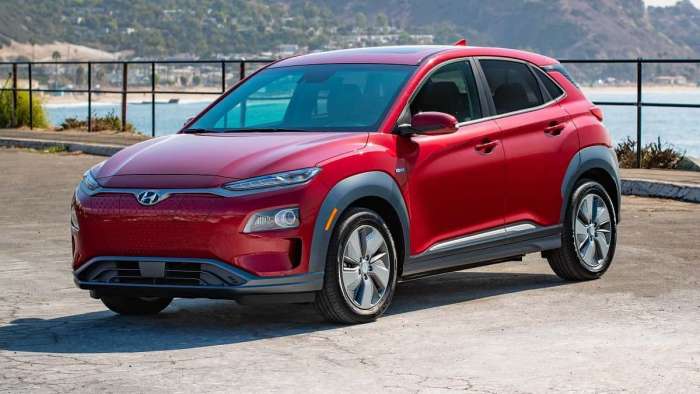 Very quietly Hyundai and Kia are making the best EVs sold in America. Here's why we concur with the folks at U.S. News Autos.
Advertisement

How could a new list of the best green vehicles in America not include the Tesla Model 3? Well, the Model 3 might have found a spot on our top-ten list, but we can't call it the best EV without having tested it for longer than 30 minutes. And Tesla doesn't support the media in any way. Perhaps that's why the folks at U.S. News skipped over it in this year's rankings of the Best Hybrid, Plug-in, and Electric Cars of 2020?

The new list includes the Tesla Model S as Best Luxury Electric Vehicle, but it does not take the top spot. rather, U.S. News named the Hyundai Kona Electric as the "Best Electric Vehicle." “It’s tough to top the Kona’s combination of quality, efficiency, and value,” said Matt Rand, research manager, and Isaac R. Braun, research analyst, of U.S. News & World Report regarding the Kona’s 2020 Best Electric Vehicle award. They also stated, “Efficiency isn’t the IONIQ’s only strong suit; it has an attractive cabin built with eco-friendly materials, easy-to-use tech, and plenty of space for luggage,” regarding the IONIQ being named 2020 Best Hybrid Car.

Related Story: Kia Niro EV is Popular Mechanics Car Of The Year - Why You Should Care

Torque News drove and compared the Tesla Model 3 back to back with the Kia Niro EV last year. Our conclusion was that the Kia Niro EV offered many of the same positives that the Model 3 offered in its SR+ trim, but had more to offer a buyer overall. Add in the significantly better incentives the Kia comes with and the scale tips toward the Kia Niro EV. For those not aware of it, the Kia Niro EV and Hyundai Kona EV are as close as two vehicles from the same parent company can possibly be.

"We are very pleased that the Kona Electric and IONIQ have been recognized as best-in-class vehicles by U.S. News & World Report,” said Scott Margason, director, product planning, Hyundai Motor North America. “Producing eco-friendly vehicles that offer great value remains a top priority for Hyundai, and we take tremendous pride in continuously working to expand the brand’s line-up to include 13 eco-friendly vehicles by 2022.”

Check out the U.S. News Autos rankings yourself here. What is your opinion of the rankings they produced? Tell us in the comments below.

DeanMcManis wrote on April 28, 2020 - 9:00pm Permalink
There has always been a direct relationship between printed media content and advertising. Since Tesla chose to bypass paid advertising, it is exceptional that they are chosen for any magazine awards. Except for the fact that Tesla is a guaranteed draw on the internet, which has long been replacing printed media. With that said, Hyundai/Kia have very good EVs. So kudos for getting the award.
John Goreham wrote on April 29, 2020 - 9:49am Permalink
It's tricky for any group, magazine, web publication, or automotive media group to give an award to a vehicle that they have never tested, have never seen at an auto show or media automotive event, from a company that does not respond to questions. Some still do award the Tesla vehicles. Motor Trend, for example, called the Model S Car of the Year. I'm not sure how much advertising plays a role. Promotion maybe. My limited time in the S and 3 would land them on any top ten list I created around green cars.
DeanMcManis wrote on April 29, 2020 - 5:13pm Permalink
There are so many Tesla enthusiasts who want to show off their car's capabilities. I have no doubt that any major automotive publication would have countless volunteers to lend their Tesla for testing if asked. Or they could arrange a Turo Tesla rental, if they were clear that it was for a review. The press has unfairly bent the truth so many times about Teslas, that I don't blame them for not returning negative story inquiries. It is great to see more EVs released every year to compare against one another, because competition breeds innovation.