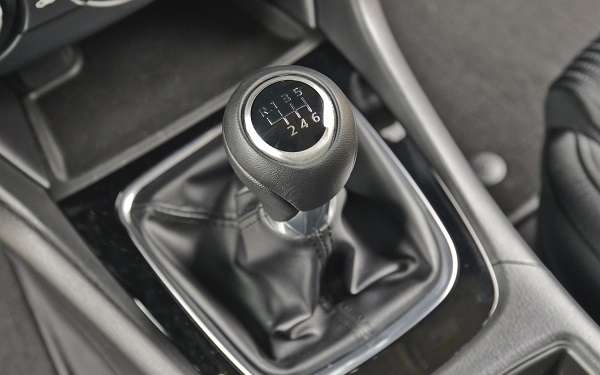 Mazda is one of the very few automakers still putting manual transmissions into affordable sedans. In fact, every Mazda car can come with a stick. Here's why we liked it.
Advertisement

The 2015 Mazda6 6-speed manual is an unusual vehicle. As the segment slowly continues its evolution toward not just automatics, but constantly-variable transmissions, Mazda and Honda alone are holding out hope to those that want a manual transmission in a sporty and attractive sedan.

Mazda Manuals
Mazda’s two sedans, the Mazda3 and the Mazda6 both offer manual transmissions. Those who want to use three pedals can get an excellent stick-shift in either. However, the Mazda3 is limited. Only its smaller, and less powerful engine can have the stick. We tested the Mazda3 and we loved it. However, it was a bit low on torque and we wondered what the more powerful engine might feel like with a stick. Now we know.

Mazda was kind enough to provide us with a test vehicle with the manual transmission only about 5-8% of buyers will opt for. Having driven hundreds of cars with stick shifts, and having owned manual Integras, Supras, Civic SIs, and best of all, a current generation Mazda Miata, with stick shifts, I consider myself well qualified to say this one is excellent.

Mazda Manuals Shine
Pedal placement in the 2015 Mazda6 is good. I don’t usually heel-toe test cars, but this model would allow for that. The clutch is very good. Frankly, I thought that all clutches were good in this more modern time, but then a 2014 Fiat 500 proved me wrong. In the Mazda6 the clutch starts to engage about an inch off the floor and then engages through its uptake all the way to about the 80% mark. Perfect.

The shifter itself is well placed in the 2015 Mazda6. In the Mazda3 I felt like I had to lean forward a bit to engage 5th. In the Mazda6 my arm was comfortably able to reach all the gears with my seat where I like it. The movement from first to second is smooth, and unless you hurry it, the shifter never transmits any bad feelings to you. Rush it, and it does feel a little notchy, as all cars do. Even when very rushed the synchros do their job and the car is never harsh to shift.

2015 Mazda6 Engine Matches the 6-Speed Perfectly
The 2015 Mazda6’s 4-cylinder engine with 184 horsepower and 185 lb-ft of torque is a good match to the manual 6-speed. It provides enough torque at low RPMs to allow the car to roll slowly in second gear through corners, and then pull the car into traffic so you won’t need to stop completely and engage first (unless it is required by law). Every stick driver knows what I mean. The Mazda3 really didn’t have enough torque for that with its smaller engine.

Gear spacing is smart. Mazda didn’t make first too short, and even in sixth on the highway one can accelerate adequately to keep up with traffic on hills. I didn’t find any use for 5th gear though. Mostly I used fourth on back roads up to about 40 mph and when merging onto the highway, and then when I was moving at a steady pace shifted 4 to 6.

Mazda Saves the Manuals
Mazda offers the 2015 Mazda6 with the stick shift in its two first trim levels called Sport and Touring. The fully loaded Mazda6s, called Grand Touring models, only come with the automatic. So you actually pay less to have the stick. There is a small fuel economy price to be paid according to the EPA ratings, but this car is simply amazing on gas anyway, so that will not deter anyone who wants to row their own gears.

Although very few buyers want stick shifts these days in affordable mid-size sedans, Mazda and the few automakers still offering them are providing we buyers with a last link to automotive nirvana, and it is appreciated.

Related Stories:
2016 Mazda MX-5 Miata vs. Dodge Hellcat Challenger - which excites you more?
2014 Mazda5 named the most affordable 3-row vehicle by KBB
Why Motor Trend's praise for the Mazda3 is so important

Brad Damon wrote on July 15, 2014 - 9:22am Permalink
While mazda has kept the manual's for the 2.0 engines, I actually just ordered some manual 2.5's the other day. Expect to see these on dealer's lots in 3 months.
John Goreham wrote on July 15, 2014 - 9:36am Permalink
Do you mean Mazda is now letting you order Mazda 3 (THREE) models with the 2.5 and the manual? If so, this is big news. There is no 2.0 Mazda 6 (six). Are we talking about the US market? Just want to clarify so I can report the news right. Thanks
Joshua rogers wrote on July 15, 2014 - 1:04pm Permalink
Yes the Mazda 3 can come with the same engine that's in the Mazda6
John Goreham wrote on July 15, 2014 - 1:57pm Permalink
Hi Joshua. I hope you are correct, but I am looking at the "Build Your Own" section and the Mazda3 is NOT shown with the 2.5 liter engine and the 6-speed manual in any trim or body style. Perhaps there is a misunderstanding. The way I se it, you can have a Mazda3 with EITHER a stick shift, or the 2.5. Not both at once.
tonyspeed wrote on July 15, 2014 - 5:21pm Permalink
It was always mazdas plan to release a manula mazda3 with a 2.5 liter engine. It just took them a whole year it seems to get around to it.
Joshua rogers wrote on July 16, 2014 - 5:39am Permalink
Yeah that's true but I got the Mazda6 with the manual and I love it it has such short throws
Joshua rogers wrote on July 15, 2014 - 2:10pm Permalink
I do apologies your correct .. 2.5 only comes with automatic transmission sorry
Evan wrote on July 15, 2014 - 2:25pm Permalink
John, Mr. Damon's post pretty much squares with other information coming out that Mazda will be offering a manual in the 3 S (2.5 liter) models fairly early in the 2015 model year in the US. There's a Mazda forum where someone posted an email from a dealer saying they're taking orders and expect the cars to be showing up on dealer lots in late August or September. Mr. Damon seems to indicate it may be later than that. I just listened to a voicemail from a local Mazda salesman telling me a manual is being offered in 2015 3 S models (2.5 liter). I have a call into him for more info. I'm pretty sure you can confirm this with dealers, if not with Mazda, and have yourself a story.
John Goreham wrote on July 15, 2014 - 6:02pm Permalink
My thanks to both Evan and Joshua. My Mazda PR rep is really good. She says currently no Mazda3 2.5 with stick, but she can never comment on future product. I have a strong feeling you guys are right. I also suspect Joshua is right and maybe he thought he better "walk it back" a bit and not get in trouble :) I have some good contacts at dealer, but not local Mazda ones. Plus, I don't want to get anyone in trouble. I'll poke around and see if I can get confirm without any harm.
David wrote on July 15, 2014 - 4:39pm Permalink
The manual transmission in my Mazda5, paired with the 2.5, makes it the most entertaining baby hauler around.
John Goreham wrote on July 15, 2014 - 6:04pm Permalink
I love that "car." I think the 2.5 in the Mazda5 is a different engine from the one in the 3 and 6. One of our TN writers, Aaron owns one as his personal vehicle. Way under-rated.
Jamie Elmhirst wrote on July 15, 2014 - 8:25pm Permalink
Yes John the 2015 Mazda3 adds a manual transmission option for the 2.5L SKYACTIV engine. It's going to be a sweet car with that combo.
Richard Klean wrote on July 15, 2014 - 11:51pm Permalink
I recently test drove a 6 touring with the manual transmission and loved it however you can't get a 6 with a manual and a moonroof, it is a auto only option for some reason. We also test drove the CX -5 which my wife preferred. Since the CX-5 is only available with a manual transmission on a stripped down sport we are looking at a 2015 Forester instead since I do not what to be responsible for putting another Automatic car on the road.
Reg wrote on July 22, 2014 - 7:59am Permalink
Richard Klean you are 100% correct! I have been holding out for a manual CX-5 MT-6 with the 2.5L myself, but it appears I may have to go the Forester route myself, even with the potential oil-consumption issues. I cannot buy an automatic!
Mike wrote on August 15, 2014 - 9:16am Permalink
Hey everyone, The 2015 Mazda3 (yes THREE) with the 2.5L and Manual has started showing up on lots. I'm planning to test drive one soon! It is here! I called and confirmed it, unfortunately that dealership is 180 miles away...
JohnCo wrote on December 5, 2014 - 5:04pm Permalink
I've had the car for 6 months now and the only complaint about the manual is occassionaly I forget it is still a sedan and try to shift to quickly - I end up pulling it out of gear a bit sooner than I want...all my fault. The car is great to drive and the stick makes it all the better. I have noticed a slight creak in the linkage when going into reverse but I think it might have been a little shy on lube so I'll have the dealer check it out- I don't anticipate any problems or pushback from them. Overall I AM HAPPY WITH THE CAR AND WOULD DEFINITLY RECOMMEND IT TO ALL!
Laura wrote on January 28, 2015 - 5:24pm Permalink
VW still makes manual transmissions. My 2012 Passat is amazing, and the new 2015's can be manual, too. Plus M/T is less expensive.
David wrote on June 26, 2015 - 12:18am Permalink
Why can't I find a six speed manual? The whole point of this car is the transmission and suspension. But both Mazda dealers in my town has a dozen MX-5s all with automatics! This only confirms that the target demographic for this car are women. Why don't they paint all pink and put a skirt on them.