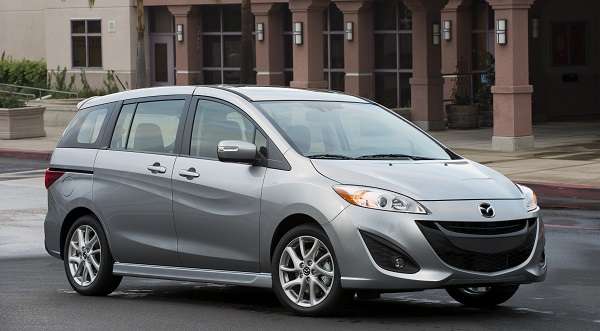 2014 Mazda5 named the most affordable 3-row vehicle by KBB

The Mazda family wins awards and accolades every week. It is nice to see the Mazda5 join the rest of the gang.
Advertisement

The 2014 Mazda5 has been named the most affordable 3-row vehicle by Kelly Blue Book (KBB). Given the many awards and top honors that the other Mazda vehicles have earned in the past couple of years it is great to see the Mazda5 join in the fun.

KBB says that the 2014 Mazda5 has a “Fair Purchase Price” of just $19,329. That is an amazing amount of family car for the money, rivaling the Toyota Corolla’s usefulness per dollar spent. Having driven the Mazda5 in the past we can also attest to the fact that it is a decent to drive vehicle. The Mazda5 needs to be kept in perspective. If you want a small sporty car, Mazda is the place to go, but this is not a sporty car, but rather, it is a family car. That said, it can come with a stick shift, which we find now on so few cars, sporty or not.

The defining element of the 2014 Mazda5 remains its sliding rear doors that open like maxi-van doors do - sort of. Since they don’t weigh as much as the Space Shuttle hangar doors do (like the maxi-vans) power assist is not required. In any case, they slide back, which is very sensible. Kids can get in and out of this thing without slamming the car parked next to them. So thank a Mazda5 owner if you ever see one getting out of their car next to you in a parking lot. The manual sliding door makes it easy for the rug rats to jump in the way-back without fuss. In the middle are two captains’ chairs that help to lessen the poking and “you’re on my side” issues that arise in a conventional sedan.

Aaron Turpen, one of the writers here at Torque News, owns a Mazda5 and he loves it. We asked him to sum the vehicle up for us and her said "We're getting a reliable 29mpg on the highway. We bought it because it's right-priced, right-sized, and has the sliding doors of a minivan, which anyone with toddlers will realize is a serious back-saver. The third row is really only useful for child safety seats or the dog, but allows us to seat six comfortably if two of them are our kids."

In the first paragraph we did not call the Mazda5 a crossover, or a sedan, or a min-van. That is because it does not really fit the current definition of those vehicles. That’s a shame because this is exactly what the mini-van should have been called. The ginormous leviathans that suburban moms drive around town are actually more aptly named maxi-vans since there is not one thing “mini” about them. This vehicle is not small for a family with children. The truth is the maxi-vans are the Big-Gulps of the car world and would not exist in the herds they do if not for the “bigger for the sake of it” attitude many in America have.

The Mazda5 is not perfect. It has not received the SkyActiv treatment. Its drivetrain is a bit dated and although the vehicle is not heavy or large, its mileage is not up to the current industry (and shopper) standards. The Mazda5 is rated at 22 city and 28 highway. By comparison, the Nissan Rogue, the number 5 vehicle on the list of the most affordable 3-row vehicles achieves a rating of 26/33 MPG. Look for this to be remedied at some future point. Stepping back from the Mazda5 and thinking out loud, this looks like the ideal platform on which to design a plug-in hybrid.

Aaron Turpen wrote on June 2, 2014 - 2:25pm Permalink
In Europe and Japan, vehicles the size of the Mazda5 are called MPVs. They're exceedingly popular and there's good reason for it. We can put the four of us into this van and then drive into town and fill the cargo area with a months' worth of warehouse club shopping and not be piling goods on top of kids. With the seats folded down, it holds twin mattresses and box springs flat. A sheet of plywood will fit (leaving the hatch open) cross-wise. The engine has a timing chain, so no timing belt intervals, and the Mazda-recommended 6,000 mile oil change (with synthetic) is awesome. Could it drive better? Sure. Could it be quieter on the road? Sure. Is the winshield hard to keep bugs off of? Yep. Can you get any other minivan for this price point? Hell no.