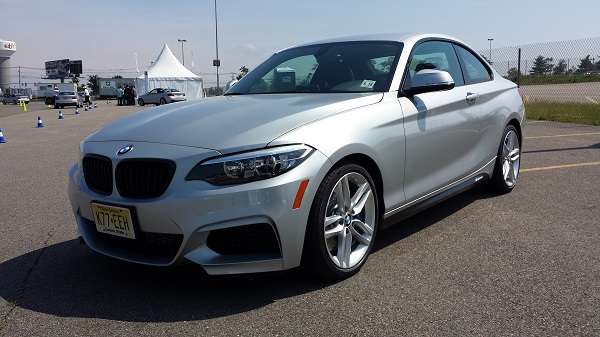 Track drive reveals excellent balance of the 2015 BMW 228i

Our second track experience in the 2015 BMW 228i confirms our first impressions. This car is a star.
Advertisement

Earlier this year we had the chance to sample the 2015 BMW 228i on an autocross course set up by BMW. We called the car “the only real BMW left” and also did a story highlighting the fun attendees had at that event driving the car like they stole it. This week we drove the BMW 228i with the "M" options package on the road course at Monticello Motor Club and fell in love all over again.

Driving the BMW 228i On-Track
What makes this car great is its balance. It is totally neutral in corners. I didn’t feel any understeer and the car seemed to turn in sharply. I liked the steering. The car felt light and nimble, particularly in quick right-left turns, like the one shortly after the top of Monticello’s back straight. The car darts from side to side without any effort. The car is just tossable.

The brakes were powerful, and the car seemed to have plenty of grip from the summer-only performance tires it was wearing. Better, the car didn’t feel like it would break way in a snap, but rather predictably. It was more fun to drive than the M3 in this respect.

Coming out of a corner, the 240 horsepower, 2-liter, turbocharged engine has great pull, but it will run out of breath given enough of a stretch on a racetrack. This is the opposite of the M3 which is like a Saturn V rocket and seems to have more torque than it can put to use. The transmission was in automatic during my drive, and the car did a good job of being in the right gear. If I had more laps to turn I would have used the paddle shifters, but didn’t. That will be my excuse to argue for more track time if I get the chance!

The rear-drive 228i is BMW’s most balanced car in the 2-Series according to a BMW employee we spoke to. Although the 235i has more power than the 228i, it is heavier in the nose. During my drive, the 228i’s power seemed to be fully in use only during the couple long straights on-track. More power would be nice, but not at any cost in cornering or stopping ability. Oh, and then there is that annoying issue of money.

Practical Considerations of the BMW 228i
The 2015 BMW 228i seems like a bargain at first. It “starts at” just $33K. However, if you want the important M package go-fast bits our car had, plan on adding about $2,200 more. If you want your BMW to have the amenities that you would find in a $30K Asian sedan of this size or larger like heated seats, a moonroof, paint that is not basic black or white, leather seats (as opposed to Sensatec), a rear view camera, and keyless entry plan on adding about $7,000 more. Configured with the options you will want to make this an entry-premium car, the 228i is about $45,000. So it’s your choice; a stripped down car with the go fast stuff and “vinyl” seats and no Nav for $35,200, or an entry-premium GT car for $45K. Go for choice two, and suddenly a much more powerful and larger Lexus RC 350 with similar content is within reach.

Those looking to get into a true rear-wheel drive German sports coupe with outstanding handling, and a capable engine would do well to start here. Having just tested an Audi A3 sedan with its AWD adapted from a front wheel drive platform, I can say that the feeling is night and day different. This BMW 228i has the stuff everyone talks fondly about in a compact German touring car. Things are changing in the compact, entry level German car world. Be sure you get the real thing.