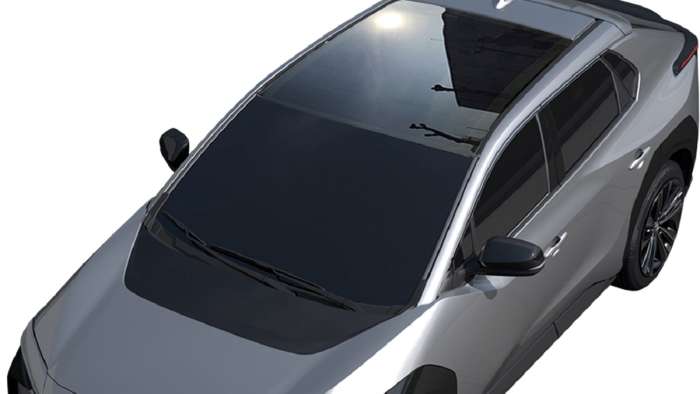 Toyota’s all-new bZ4X battery electric vehicle has been revealed by Toyota. There is much to love Toyota’s third-generation BEV. One unique aspect to this new EV from Toyota that has us very excited is the solar roof.

Toyota says the solar roof is estimated to add up to 1,800 km per year or range. Of course, that will be in places like sunny Southern California, Colorado, or Arizona, where the sun is both strong and infrequently covered by clouds. Those owners who do park outside in a sun-intensive area will enjoy a free year of EV range every 15 years of ownership. The roof adds range whether the ignition is on or off.

Over an estimated fifteen-year ownership period (my own Highlander turned fifteen this year and is still going strong), the bZ’s solar roof will add as much as 17,000 miles of EV range. That is local-emission-free range the owner won’t need to draw from “dirty and dangerous” coal, nuclear, trash cogeneration, or any other planet-damaging electricity supply. It will also free up hydro, solar, and wind power to be used to power EVs or make more solar panels and wind turbines.

We’ve covered enough solar roofs on vehicles like the Prius and Hyundai Sonata Hybrid to know that many green vehicle fans, even many EVangelists, seem to scoff at the worth of a solar roof. We often hear that “the range addition is meaningless.” Is a year of range meaningless over the life of a vehicle? How could it be? Another common counterpoint is that “Solar roofs cost more than they are worth.” While we won’t argue that a solar roof may cost more than the value of one year of electrical range of a BEV (around $550) today, who knows how much a year’s worth of electricity will cost in 2037? If the chip shortage has proven anything, it is that the law of supply and demand is alive and well, even in economies propped up by borrowed paper money.

Anyone who charges a car with solar power should appreciate the solar roof on the bZ. It offers a charging source during periods of shortages, blackouts, or other interruptions. The roof also looks pretty cool. See-through glass roofs are all the rage, but they are delicate and don’t add any range to the EV. If the intent of an EV is environmental progress, how can a solar roof be anything but welcome.

Toyota has been offering solar roofs for many years, but this is the first one that will add meaningful EV range to a BEV. Tell us in the comments below if you think it will be a popular feature. Naysayers are welcome as well. Tell us why a year of EV range is meaningless.

Mark Day wrote on November 5, 2021 - 7:28am Permalink
Parking the vehicle outside for fifteen years, for sun exposure, would most assuredly destroy the paint and the interior. Also, the additional cost of the solar roof is another outlay. Conclusion: Savings are imaginary – another “green” pipedream. But, not too bad on the feel-good scale – could be another emotional “shared experience”.
John Goreham wrote on November 5, 2021 - 7:55am Permalink
A lot of green energy is a pipe dream, with that, I agree. However, I worked in the rat race for small and large companies for 30 years. During that time, I drove to work every day and never once parked a car inside a covered garage. My cars never had any unusual paint problems. If I'd had an EV with a solar roof I'd be on my second year of driving range by now.
Mark Day wrote on November 5, 2021 - 3:29pm Permalink
Agree that there are a lot of variables. It would take a long-term period to determine the cost electiveness. My vehicles are mostly garaged.

LG's New EV Battery Plant Is a Welcome News for Tesla
Tesla Giga Berlin's New Hurdle: It's Not Only the Gov't, but Now Tesla Itself
END_OF_DOCUMENT_TOKEN_TO_BE_REPLACED