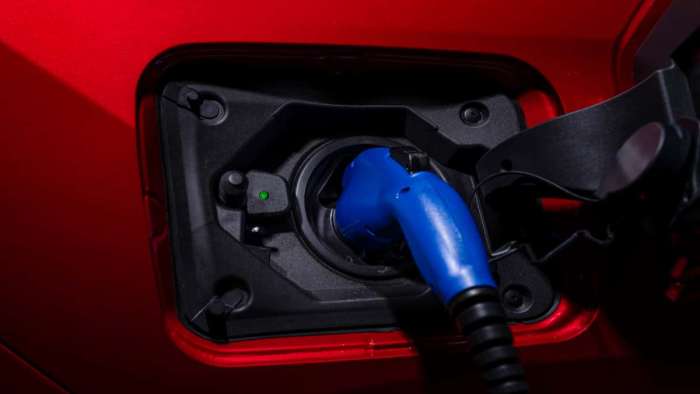 Toyota’s hybrid line grew dramatically in 2020 in America while the general industry shrank and BEVs from all but Tesla stalled at the gate.
Advertisement

During the past year, Toyota’s hybrid sales in America from its Toyota and Lexus brands have increased dramatically in three ways. First, Toyota simply delivered more overall. Second, Toyota continues to add new hybrid models and is now only equipping some redesigned models such as its Sienna and Venza with hybrid powertrains. Third, Toyota is expanding the types of hybrids the company offers. Toyota now offers four-cylinder hybrids aimed at maximum fuel economy and the lowest possible emissions, as well as mainstream hybrids with horsepower in the high 200s that compare well to other brand’s conventional powertrains in power, but with much better fuel economy. And Toyota also builds V6 hybrids and plug-in hybrids that offer performance coupled with efficiency and 300+ hp. 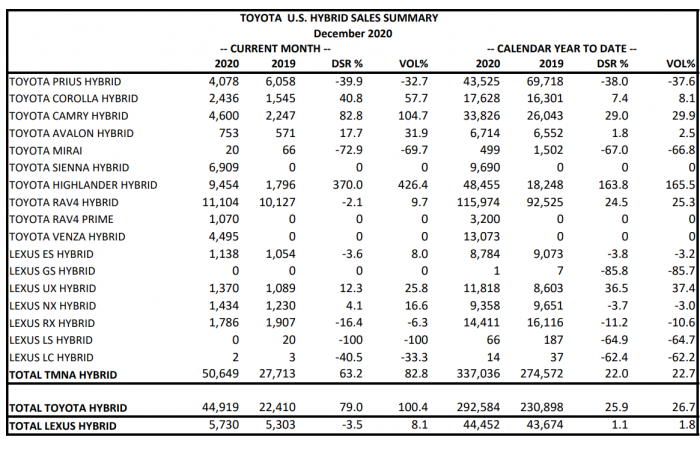 How Large Is Toyota’s American-market Hybrid Business In Total?
If it were a stand-alone company, Toyota’s hybrid sales would be larger than the Mazda, Volkswagen, Kia, or the Mitsubishi brands. Toyota’s hybrid sales are larger than all of the vehicles sold by GM’s Cadillac and Buick lines combined. One reason we know these facts is that Toyota highlights its green vehicle sales in America and provides a detailed breakdown to the media. By contrast, Tesla does not break out its US vehicle sales from its global numbers. 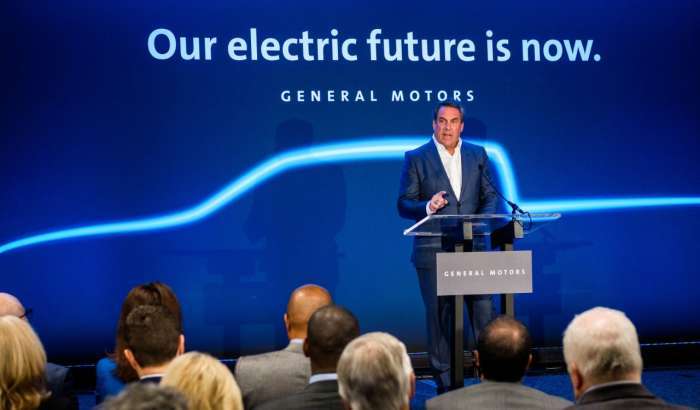 What Happened To GM’s EV Sales?
In its press release highlighting its 2020 sales this week, General Motors, the company who told us one year ago that “the all-electric future is now,” didn’t mention green vehicles. There is no new battery-electric vehicles to highlight the sales of, and the company now has fewer electrified models for sale than it did two years or five years ago. The Chevy Bolt managed to top 20,000 units sold, due in large part to five-figure dealer discounts. By contrast, Toyota’s RAV4 Prime plug-on hybrid launched this year is selling at above MSRP at some dealerships.

Toyota Hybrid Comparisons To Other Brands’ Green Vehicles
Toyota’s midsize, five-passenger Lexus RX 450h is a V6 hybrid with over 300 hp. It has been in the marketplace for many years and multiple generations. It earns a 30 MPG combined rating. Genesis launched a competing product in 2020 called the GV80. There is no green trim and the top trim uses 50% more fuel than the top trim Lexus RX 450h.

Honda is a long-time peer of Toyota when it comes to green vehicles. In 2020, Honda launched a new hybrid version of its top-selling model, the CR-V. It earns a 38 MPG rating, about 2 less than the RAV4 Hybrid. However, Toyota upped the ante in 2020 and now offers the RAV4 Prime with a 94MPGe rating and the ability to travel to and from work on a typical commute using no gasoline at all.

Tesla, Honda, Mitsubishi, Other Brands Cut Content On Top Models
If you’re interested in a Honda hybrid, be aware that Honda stole your spare tire. You won’t find a spare in the CR-V Hybrid, Clarity, or Accord Hybrid. Tesla doesn’t sell a vehicle with a spare tire (or Apple CarPlay). Mitsubishi’s Outlander PHEV doesn’t have a spare. If you are looking for a green vehicle with a spare tire, Toyota is emerging as your only choice. The RAV4 Hybrid and Prime as well as the Camry Hybrid, Venza, and Highlander Hybrid all have standard spares on all trim levels, and a spare is optional in the new Sienna minivan.

Other Green Vehicles From Other Brands
This is a story about American-market green vehicles in 2020. We’d be remiss if we didn’t point out that Tesla’s fantastic Model Y came to market this year, and as far as anyone knows, is selling well in the U.S. Tesla won’t say. Tesla’s Model 3 also seems to be doing well. Did Tesla grow its deliveries in America in 2020? We have no data to prove it, but we think so. Tesla did announce that it was just shy of its half-million vehicle goal globally. GM didn’t add a single electrified passenger vehicle in the year, nor did Ford. In fact, Ford’s planned Escape PHEV launch was pushed out. Nissan’s recently updated Leaf didn’t even break 10,000 units in 2020.

Looking ahead, we will be interested to see how a constrained battery supply chain impacts green vehicle sales in America. Kia, Ford, Hyundai, and Mitsubishi are all planning new PHEVs for 2021. Ford’s Mustang Mach-E is about to go on sale. Our hope is that one year from now we will be reporting on very large numbers of green vehicle sales from these companies who are trailing Toyota.

DeanMcManis wrote on January 11, 2021 - 2:15am Permalink
Tesla sold about 90K Model 3s in the U.S. and 78K Model Ys, but this is a fraction of anticipated Tesla sales worldwide coming in 2021, as China built Model Ys are sold out, and later this year we should see new Model Y production in Giga Berlin and Giga Texas factories. The Toyota RAV4 and Honda CR-V have always been top sellers in the crossover market, and their new hybrid models have been very popular despite 2020 being a tough year overall.