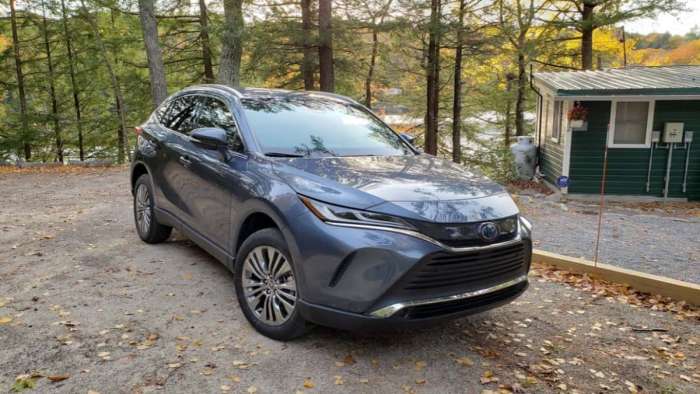 The all-new 2021 Toyota Venza offers shoppers a new alternative to the RAV4 Hybrid and Prime. We compare and contrast the Venza to its siblings in this review.
Advertisement

The Toyota Venza has been re-styled and re-imagined by Toyota. It is now very similar crossover to the top-selling RAV4 Hybrid. In this review, we will compare and contrast the new Venza to the RAV4 Hybrid and RAV4 Prime, two vehicles with which we are familiar from recent testing. 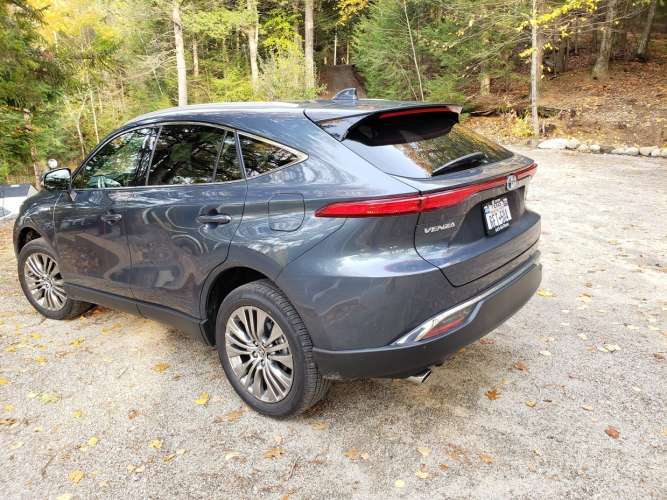 2021 Toyota Venza - What Is It?
The 2021 Toyota Venza is a two-row crossover with room for five passengers. The Venza offers upscale styling, and a look that those shopping for a car-based crossover may prefer. As opposed to those who want an SUV-type look. The Venza has 98.3 cubic feet of passenger space as compared to the RAV4 Hybrid or Prime's 98.9 cu ft. So it is almost identically-sized. However, due to its rear hatch design, the Venza has a meaningfully-smaller cargo capacity of 29 cubic feet with the rear seats up, and 55 with them folded. Compared to 38 cu ft and 70 cu ft offered by the RAV4 Hybrid. In our testing, that storage capacity was missed on weekend trips. 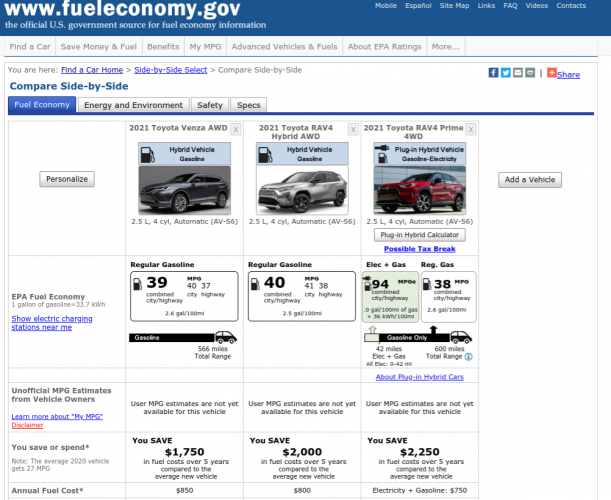 2021 Toyota Venza - What Powers It?
The 2021 Venza is powered by Toyota's hybrid powertrain. There is no plug-in version available. The Venza has 219 hp and ample low-end torque due to its electric motors. All-wheel drive keeps the power under control in all situations. This is the same powertrain that the RAV4 Hybrid has. In the Venza, the EPA-estimated combined rating is 39 MPG. In our limited testing on highways and rural back-roads, we observed a 37.5 MPG result. The RAV4 Hybrid earns a 40 MPG rating. The plug-in hybrid RAV4 Prime can operate on electricity alone for up to 42 Miles, and its MPGe rating is a whopping 94. We observed a hybrid-only fuel economy of 46 MPG in the Prime on a similar trip this past month.

2021 Toyota Venza - What Does It Cost?
The 2021 Venza LE has a starting price of about $34K including destination fees. Our mid-trim XLE tester with Premium Audio and Softex seating packages had a price including destination of $39,735.00 The RAV4 Hybrid seems to trail the Venza's pricing by about $1,500 when comparably-equipped. Our observation is that the RAV4 Hybrid is a slightly better value.

2021 Toyota Venza - How Does It Drive?
The Venza has ample starting power and great low-end torque. It is more satisfying in that repsct than every entry-level top seller, including the conventional RAV4, Mazda's base CX-5, Subaru's Forester, and Honda's conventional CR-V. The hybrid engine makes full use of the 2.5-liter gasoline engine, but also bumps up the power and torque when it matters most by using the hybrid electric motors. Power is good in all situations. From our subjective testing, there is no difference between the Venza and the RAV4 Hybrid trims. They feel exactly the same.

However, the RAV4 Prime feels altogether different. The Prime drives like an electric vehicle in all situations and feels dramatically-more powerful when driven in "Auto" mode, particularly when Sport is also selected. The RAV4 Prime is also much more quiet and refined on the road.

The Venza handles well, but it won't be mistaken for sporty. It doesn't feel at all like an Acura RDX or BMW X3. It is more of an everyday, multi-use vehicle. Over dirt roads, we thought the Venza did very well. Comfort is better than the low profile tires would lead one to believe. 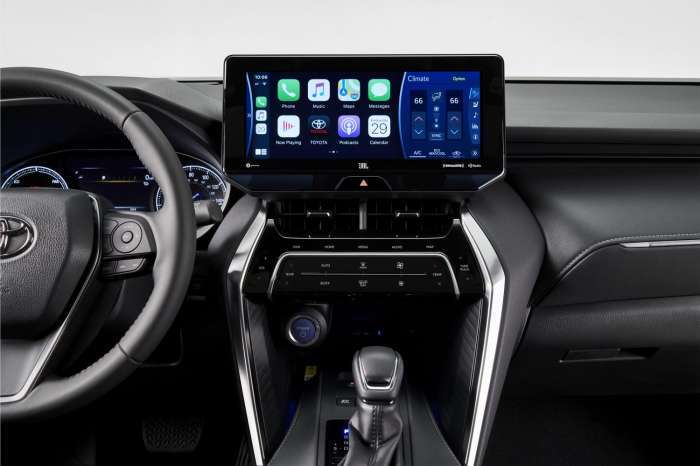 2021 Toyota Venza - Infotainment and Interior Features
One way that Toyota differentiates the Venza from the RAV4 line is the interior styling. The Venza adopts a more upscale look, particularly in the center console. The Venza has both Android Auto and Apple CarPlay, but a cord is required. There is also a wireless phone charger and a perfectly-sized phone tray. The center console also works quite well.

Those who want a clean center stack will prefer the Venza. There are few buttons. In fact, no volume or tuner knob. The AC is part of the infotainment system, but the heat and events for the seats are controlled by real buttons near the console. We missed the RAV4 Prime's screen and its volume knob. The Prime also has a full-color head up display at the same cost point for the buyer.

All of the Toyota Venza and RAV4 trims offer a compact spare. You won't find that in a Honda CR-V Hybrid. The Venza also had roof-racks, but they are the low-profile style. Anyone with kayaks and bikes knows that means you will be shopping for your accessories at Toyota. We prefer the raised-up type that can work with any Thule or Yakima setup for our crossovers. Here, Toyota opts for a stylish look rather than function, but some buyers may prefer it.

Our $40K tester had no moonroof at all. The RAV4 Prime had a panoramic moonroof at this same cost point. 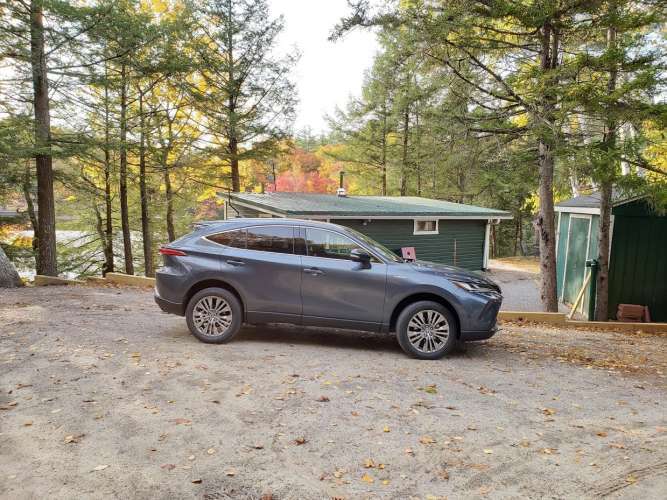 2021 Toyota Venza - Conclusion
The Venza is a stylish and frugal AWD crossover. The Toyota hybrid formula works wonders on the Venza, and we would prefer it to almost any conventionally-powered crossover from any competitor in this price range. However, the RAV4 Prime looms large in our memory. We cannot look past the value and cargo advantages the RAV4 Prime offers for those who can take advantage of the incentives. Unfortunately for Toyota RAV4 Prime shoppers, Toyota's production of the RAV4 is not keeping pace with buyer demand. We doubt Toyota will have that "problem" with the Venza.