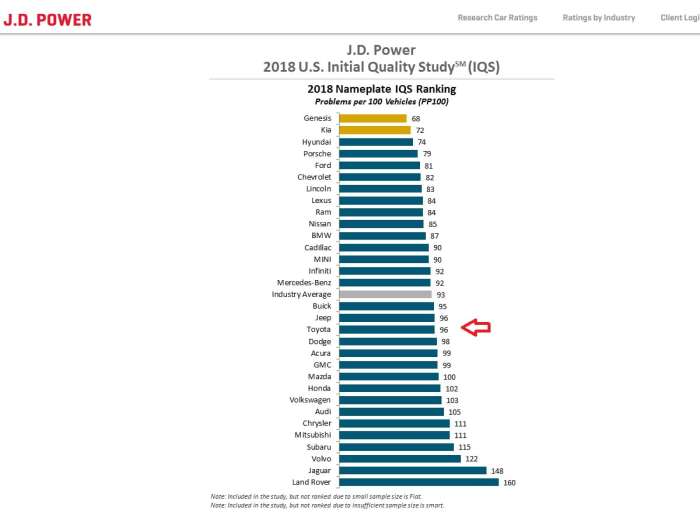 Has someone moved Toyota's cheese? The latest initial quality study from one expert puts Toyota and the Prius in the also-ran group.
Advertisement

Toyota has scored well below average on the latest 2018 J.D. Power & Associates Initial Quality Study (IQS). The study asks owners to report issues within the first three months of ownership. It is one of many metrics automakers and shoppers use to judge the quality of a vehicle when first delivered.

In 2017, Toyota scored just above average. This year, the company has scored below average and below many large-scale automakers like Chevrolet, Ford, and even Jeep. Both Hyundai and Kia, direct competitors to Toyota, scored at the very top of the mainstream brands listing. The rankings show that Kia owners have 25% fewer reported problems in the first three months of ownership than do Toyota owners.

The Prius, long considered one of the most trouble-free cars available scored lower in its category than expected. The Nissan Leaf and Hyundai Ioniq both scored higher than the Prius, which was ranked 13th in its segment, compact cars. The Prius just a 2/5 score overall. In the categories of Interior features, overall design quality, and accessories, the Prius earned just a 2/5. The Prius did earn a 5/5 for mechanical and drivetrain issues.

If there is any good news for Toyota fans, it is that the Corolla was the highest-ranked compact car. Interestingly, the Corolla earned a 5/5 on accessories. Why the two cars, produced by the same company have such different rankings is unclear.

The bad news for Toyota and Lexus fans is that only the Corolla topped its category. No other model from either brand was first in its segment. The Toyota Tacoma finished last in its segment.

Related Story: Is the New 2016 and 2017 Toyota Prius As Reliable As Older Prius Cars?

Lism wrote on June 21, 2018 - 8:50pm Permalink
Surprising to hear, My 2009 Tacoma was trouble free for the entire time I had it, sold it with 205k miles. My 2011 4Runner has 147k and also trouble free. I guess the only thing I really had to do was a wheel bearing for each but to me that’s considered maintenance with that many miles
Jeff B wrote on June 26, 2018 - 3:56am Permalink
Its not just initial quality where Toyota is falling off. Its long term durability as well. I’m one of many who bought the Prius 3rd generation introduced in 2010. At 90k miles it started burning oil. Google “prius oil consumption” and you will find hundred of complaints. “Green cars” with tail pipes full of heavy soot.