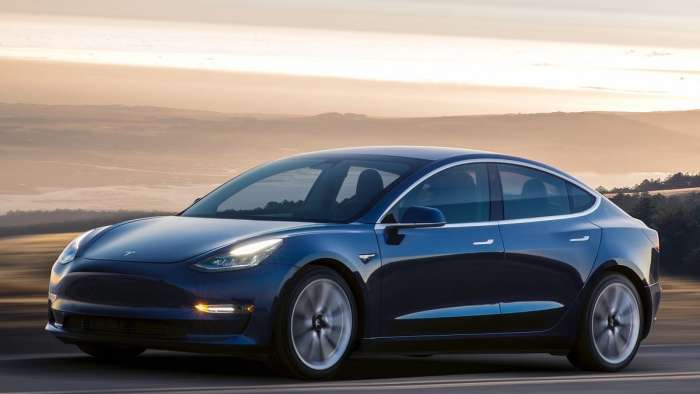 The Tesla Model 3 was the second-leading sedan its size in sales for December 2018 in the American market.
Advertisement

In the month of December, Inside EVs, our trusted source for EV sales figures, reports that the Model 3 compact sedan from Tesla generated 25,250 unit sales. For those who wish to parse words, we define a sale the way everyone in the auto industry does, that being when a vehicle is delivered to an owner who then pays for the vehicle. This volume of sales is on-par with the top-selling compact sedans in America, the Toyota Corolla, and Honda Civic. No other car this size and type comes anywhere near these numbers. By comparison, the Ford Focus generates about a quarter this volume of sales.

Toyota reports 23,793 Corolla sedans sold in December, making it the number three selling compact sedan in the country. Honda's Civic, though down sharply for the month, still put up 26,384 units sold. Notably, Tesla's Model 3 has a price twice what these vehicles cost. Even after state and federal incentives, the Model 3 is still significantly higher in price.

Amazingly, the Camry and Accord, America's perennial top-selling cars, were not far ahead of these smaller sedans in December. The Camry had an amazing December in 2017 posting up over 43K units sold, but this past December, that number was more in line with the car's typical monthly number of 29,000 units. The Honda Accord managed to nearly match that with 28,627 unit sales.

We will do a full forecast for 2019 and explain why we don't expect the Model 3 to remain at this high point and why that is not indicative of any type of 'failure" for the Model 3. We could be mistaken, but the tea leaves we are reading show the Model 3's U.S. monthly sales dropping back to between 15,000 and 20,000 units on average going into 2019. However, Tesla allocates its deliveries in slugs and we would not be surprised if the luxury EV maker had another big month or two in 2019 that generates some interesting comparisons to the top-selling cars in the U.S. market.

Author Notes:
1) We are discussing just cars in this story. Crossovers like the Toyota RAV4 and trucks like the Ford F-Series and Chevy Silverado dwarf these sales volumes on a regular basis.
2) The Tesla Model 3 is so far ahead of the luxury cars its size and price that comparisons are now meaningless. For perspective see our story, "Tesla Model 3 Outsells Every Car Model At BMW, Lexus - Outsells All of Audi and Acura"

kent beuchert wrote on January 7, 2019 - 7:54pm Permalink
No one knows what the sales figures are for the Model 3 for December, or for any month. That's because most of those deliveries were to people who bought the car over the past 2 1/2 years. Let's stop pushing this fiction called "Model 3 sales."
John Goreham wrote on January 8, 2019 - 2:29pm Permalink
Inside EVs uses vehicle registration data as one of its data points to follow Tesla sales. A vehicle cannot be registered until it is sold. Feel free to continue calling a deposit on a vehicle reservation a sale if you like. The rest of us will stick with the classical definition and the one every automaker and every accountant uses. Tesla is now shipping vehicles including the Model 3 from stock now anyway, so the whole reservation vs sales debate is moot.