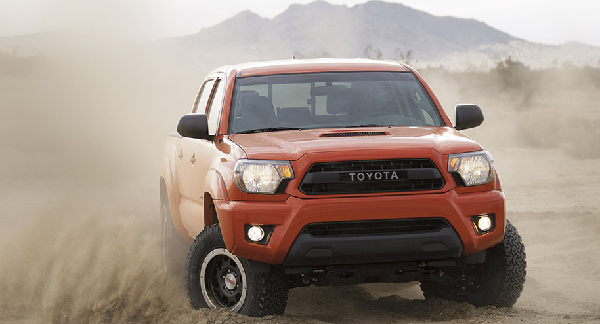 Petition to bring the 2015 Tacoma TRD Pro Series to Canada - Sign it here!

Our friends north of the border are feeling very left out of the Tacoma off-road fun. Here’s how you can help.
Advertisement

We try very hard to bring our readers all the news, opinion, speculation and silly wild guesses we can uncover about the Toyota Tacoma. The fans of the Tacoma are passionate, active, and make their opinions known. Our recent coverage of the Toyota Tacoma TRD Pro Series brought to light the fact that this special edition off-road Tacoma is not offered in Canada. We have received multiple requests to ask Toyota why that is and if it will be coming.

No Plan for Tacoma TRD Pro In Canada – Yet
After our readers asked us to we reached out to Toyota directly. Three marketing and product managers joined the discussion. The upshot of the reply was that the TRD Pro is not planned for release in Canada. No reasons were given. This is not unusual. Automotive companies don’t want to add insult to injury, so they stick to the facts in matters like this. We do not blame them one bit. Not in writing, but verbally, we did hear that there are some special Tacomas available in Canada, and we will assume that it is TRD components available from dealers, but not that add up to the equal of a TRD Pro.

Next Step -Tacoma Plea
Rather than leave posts under stories about the 2015 TRD Pro Tacoma where they may be lost in the conversation, we came up with the idea to offer this story as a simple petition. If you are from Canada and you want the TRD Pro Series Tacoma to become available simply comment below. Please give us your Province or nearby city and if you have a Tacoma now tell us the year and any details you wish to share. We will forward the story to Toyota directly once folks have had a chance to comment. If you live outside Canada and want to show your support, feel free to jump in.

Like all our posts you are welcome to use a nickname and your e-mail is not published. We don’t spam our readers, and we have nothing to sell but our web content. This is not a sneaky solicitation.

Petition Below In Our Comments Section
To kick off the fun, we are posting some past comments from other stories here in the body of the story. Please keep in mind this in not English class and many readers respond via smart phone, so choppy text is welcome:

From Eric - HI I have a 07 taco 4 L v6.
Love it. Looking to buy a new one and now side tracked with what the 2016
will be better fuel economy wanted for sure. Better electronics make sense in this
quickly changing world, especially one that allows software upgrades as we
get with pretty much all operating systems. This talk of down powered new tacos has me worried. I like passing quickly. Looks I'm not super worried about. Any comments?

From Lee - Any word on whether Toyota will offer the TRD PRO line up in Canada?

From Max - Hello I live in Alberta Canada, and I want to buy a new 2015 Tacoma. I've
been told by the dealers that Canada will not be getting the TRD PRO series
at all. Is this true? Or will I be able to buy one in the fall?

From Brett - Why would Toyota only release the TRD Pro in USA only? I contacted a General Manager of a local Toyota dealer and he informed this was also the case.....very disappointing. This was 3 months ago. TMS has made very poor decisions on which market would be fickle for the special models. All FJ cruiser trail sold out quickly, Canadians love their Toyotas. Hopefully Toyota will look at diesels in their trucks before they lose more market share to other manufacturers. Big opportunity miss by not having diesel in FJ Cruisers, Tacomas, and other trucks in NA market. They have Hilux in other markets and they dominate, makes no sense. Too much ex domestic executives in Toyota making poor decisions like they made in their previous roles. Come on Toyota lead the market, and stop chasing the competition.