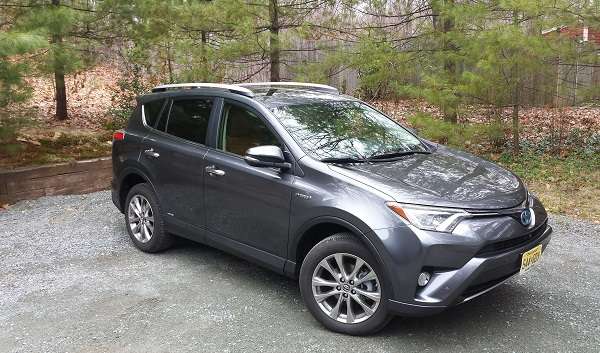 The new 2016 RAV 4 Hybrid doesn’t care how you drive it, I found out as I test drove it to review it. You never drop below 33 MPG.
Advertisement

The 2016 Toyota RAV4 Hybrid we tested this week impresses in many ways. However, the most impressive aspect of this vehicle is that it does not care how you drive it. Stop and go around town in traffic = 33 MPG or better. Sport mode on back roads pushing the legal limit = 33 MPG or better. Highway driving at 65 MPH on cruise control = 33 MPG or better. ECO Mode – OK I admit that I turned that off within a mile of trying it. Let’s assume 33 MPG or better. Having tested hundreds of vehicles for Torque News, no vehicle was so immune to driving style and environment as this RAV4 Hybrid.

With the regular gasoline this vehicle takes, my cost per mile over a week of testing was six cents per mile. With electricity in my area around 20 cents per kWh, I would not have saved money if I were in an EV. Perhaps this is why the newly released RAV4 Hybrid is outselling every electric vehicle model in the U.S. market right now.

2016 Toyota RAV4 Hybrid Limited – Interior Design and Features
The RAV4 of all types has one huge advantage over all other compact crossovers on the market. Its dashboard and center section are up and away from the driver’s right knee. I love the affordable Subaru Forester and premium Lexus NX 200t, but when I sit in them, my knee is in constant contact with the hard plastic of the center tunnel. Only Toyota has figured this out and designed in a solution.

The dash of the RAV4 Hybrid Limited is a mixture of hard and soft plastic materials that has a modern look. Toyota does not offer leather seating in any RAV4, so this Hybrid Limited has the most premium material available. Called Softex, it has the look and feel of leather, but not the smell. Toyota must not be moving away from leather for animal rights reasons since the steering wheel is still covered in hide. I’m going to reserve judgment here and say that Softex has its charms. One being that Toyota puts on the dash, where it adds an upscale look and feel.

The driver’s seat in the RAV4 Hybrid Limited is power operated in all the ways one would expect. This is a very important feature for me. Toyota is stingy with power seats, and as far as I can tell only RAV4s priced well into the $30ks have power seats. A Subaru Forester, by contrast, offers a power seat for around $27K.

The infotainment system of the RAV4 Hybrid Limited is perfect. Easy to use touch interface, simple and effective Nav and a good audio system with Pandora and other apps ready to go. Unlike in the CR-V, there is also a volume and tuner knob. Toyota gets it.

Space is generous. I own a 2007 Highlander, and this RAV4 Hybrid has more usable passenger space inside. The rear seats, in particular, have ample legroom and headroom for 6-foot teenagers. The cargo area is large for the class, and under the cargo floor is a temporary spare tire! Bonus points for Toyota keeping it and resisting the urge to hide the battery there. The battery is instead up against the back bottom of the cargo area. It was never in my way while testing and seems like a very small compromise given the benefits of the hybrid drive.

2016 Toyota RAV4 Hybrid Limited – The Drive
This RAV4 Hybrid Limited scoots. With 194 hp and loads of electric motor torque, the RAV4 Hybrid is the quickest RAV4 I have tested (since the V6 was discontinued) and seems much quicker than most vehicles in its class. The Sport mode helps this quite a bit. Though the gasoline engine is loud and seems to be either at 90% of max RPM or off, the system works. And did I mention it gets 33 MPG or better– ALL THE TIME.

Like all RAV4 Limiteds, the ride is a bit too stiff in my opinion. Handling is crisp, though. When I drive a crossover like this RAV4 Hybrid, I don’t toss the vehicle around like I would a compact sports sedan. Given its mission and personality, the RAV4 Hybrid handles nicely. Good luck finding a sportier ride if you limit your search to affordable, compact crossovers. Don’t trust the boy-racer reviewers who call Toyotas boring. They spend too much time in sports cars to understand how family cars are supposed to perform.

On the highway, the RAV4 Hybrid Limited really shines. It tracks perfectly straight and there is simply zero engine noise when cruising. The feel of the vehicle is that of a stable, much heavier, more expensive luxury crossover. Here the RAV4 Hybrid departs from the conventionally-powered RAV4s, which did not impress me this much on the highway.

Braking is perfectly normal. You don’t sense the regenerative braking in the pedal, but you can hear it, and it sounds very cool. When starting off, the vehicle is usually in EV mode and not using the engine. Occasionally, the gas engine would kick in while I was backing up slowly out of a garage. That is the only time one notices the hybrid drive alternating between electric, gas engine or both. The engine and CVT behave a little differently from cars with a geared transmission do, but the Honda CR-V, Subaru Forester, and all the top crossovers in this class are now using CVTs, so this is not unique to the RAV4 Hybrid Limited. During my April test, it snowed like the Dickens. Click here to see how the RAV4 Hybrid's unique AWD system performed.

2016 Toyota RAV4 Hybrid Limited – Safety
The 2016 RAV4 has scored “Good” on all IIHS crash tests. The Hybrid Limited comes standard with superior-rated forward crash prevention, and thus, it is a Top Safety Pick Plus vehicle. No compact crossover at any price has higher safety ratings. Even better, the lane departure warning system can be turned off (we all hate these systems) and it does not show you an idiot light when off (like the Forester and other crossovers do). Rear cross traffic alert, backup sonar, and backup camera are standard on RAV4 Hybrid Limited. Don’t buy a crossover without these.

Conclusion
The 206 RAV4 Hybrid Limited is a green vehicle with no compromises. It earns the highest fuel efficiency ratings in its class by a wide margin. Although its price is not as low as some competitors, it is very close, and if gasoline prices return to their prior highs, it will repay the owner in a handful of years. With top safety scores, the best brand reliability in its class, and Toyota’s reputation for durability, the 2016 RAV4 Hybrid Limited should be considered a front-runner for those shopping the top trims of this wildly popular segment.

LG's New EV Battery Plant Is a Welcome News for Tesla
Tesla Giga Berlin's New Hurdle: It's Not Only the Gov't, but Now Tesla Itself
END_OF_DOCUMENT_TOKEN_TO_BE_REPLACED