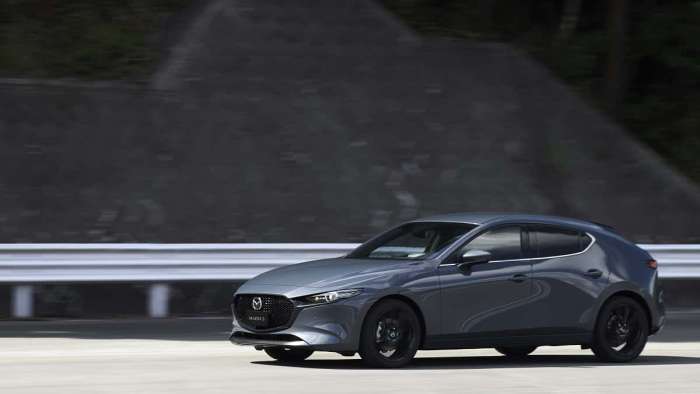 Mazda will be recalling its Mazda3 over unwanted automatic emergency braking.
Advertisement

Mazda will be recalling its 2019 and 2020 Mazda3 cars. NHTSA is closed for the holiday break, but once the agency re-opens we expect that the agency will issue a formal recall number for the Mazda3 over unwanted automatic emergency braking.

Mazda's North American Operations reports that it has filed a notification with the National Highway Traffic Safety Administration (NHTSA) for a safety defect, which the company says exists in certain 2019 and 2020 Model Year Mazda3 vehicles. Mazda says that the affected vehicles may unexpectedly stop while driving due to inadvertent activation of the Smart Braking System (SBS) automatic emergency braking system.

Mazda blames incorrect programming of the Mazda3's SBS control software saying that it may cause the vehicle to falsely detect an obstacle in front of the vehicle while driving and could automatically apply the vehicle brakes to prevent or reduce damage from a collision, even though no collision is imminent.

Related Story: The 2019 Mazda3 Is One of The Safest Vehicles In Its Class - Here's Why

Obviously, this poses a potential crash risk. Mazda says that no crashes or injuries have occurred. However, Consumer Reports disagrees with Mazda's finding, saying that its team looked into the NHTSA data and, "...found evidence of one injury and one crash related to sudden and unintended braking in 2019 Mazda3 vehicles."

Mazda says that it plans to update the software and will alert owners by snail mail if they own a vehicle related to this coming recall. Owners can always check to see if they have an open recall on their vehicle at Mazda's recall lookup site. We would suggest waiting until January 7th to do so, since NHTSA may not have had time to issue the recall file until that time.

Hat tip to Torque News reader/commenter Mancini Ellen for alerting us to this new topic.

Ellen Mancini wrote on December 31, 2019 - 11:41pm Permalink
While no injury or death has been reported in regards to the malfunctioning of the emergency brake system on 2019 Mazda 3 vehicles, I would venture to say that suddenly coming to a deadstop in the middle of any road is grounds for serious concern. Having recently experienced this, I can unreservedly state that driving any vehicle with a malfunction of this nature does not make for a happy driving experience. It is my opinion that Mazda, knowing the VIN of the cars to be recalled, should take immediate steps to get those vehicles off the road, perhaps through a temporary replacement program, rather than leaving the corporation open for possible liability issues relating to bodily harm. There has been no software proposal as yet that is a cure for the problem. I’m on my fifth Mazda and never planned on purchasing a different brand. I still have my fingers crossed, but am driving with my flashers on and sticking close to the shoulder.
John Goreham wrote on January 2, 2020 - 9:36am Permalink
The automatic emergency braking system can be switched off. You do need to do it each time you restart the vehicle, but compared with "driving with flashers on close to the shoulder" may be a better option. There is an iActive safety sense button on many models to the lower left of the steering wheel on the dash and on other models you access the menu via the settings tab in the infotainment menus. Also, if your vehicle has had an incident like what you described, you should report it to NHTSA (if you have not already) at the organization's website. Thanks again for your input.