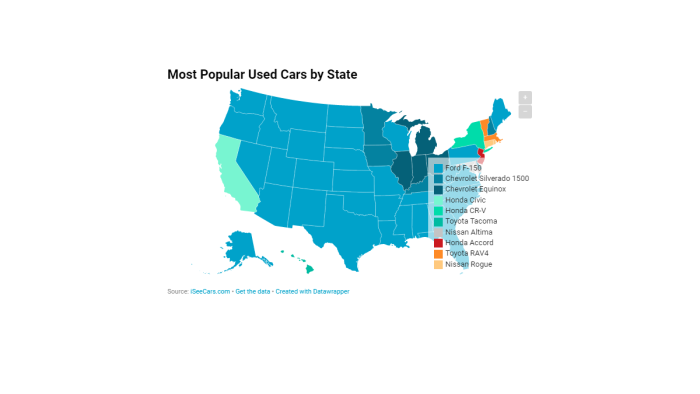 One Image That Defines The Ford F-150's Sales Dominance

We knew that the Ford F-150 is the top-selling nameplate in America. What we didn't realize was just how dominant it is. Until we saw this.
Advertisement

Anyone in the world of auto writing or auto enthusiast knows that the Ford F-Series is the top-seller in America (and also Canada). Our own Jimmy Dinsmore recently did a great overview showing just how the F-Series new truck sales numbers stack up. Complimenting that story, our own Marc Stern did a focus story on how the F-Series dominates the used car market as well. Without any doubt, the F-Series is the defining automobile in America.

However, a new research study by iSeeCars.com included an image we felt we had to highlight. The image shows the F-150 sales by which state it leads. That is a bit of a mouthful, but think of like an election map. We are all (painfully) well aware of what those maps mean. Or think of it like a cell phone coverage map if politics turns your stomach (like it does this writer's).

If the F--Series were running for office it would win in a landslide. If it was a cell phone coverage map it would own all but the city clusters.

A big part of why this is so is summed up by iSeeCars CEO Phong Ly. He says, “As common work vehicles, pickup trucks are likely to be purchased new for professional purposes,” said Ly. “The Ford F-150 and Chevrolet Silverado 1500 are among the best-rated vehicles in their class for towing capacity and are not as luxurious as their competitors, which makes them popular work vehicles or family vehicles for those who want something more rugged than an SUV or minivan.” Ly also notes that F-150s are not just work vehicles. “While pickup trucks are commonly known as being work vehicles, they have evolved to be popular family haulers as well thanks to their abundant cargo room and safety features,” said Ly.