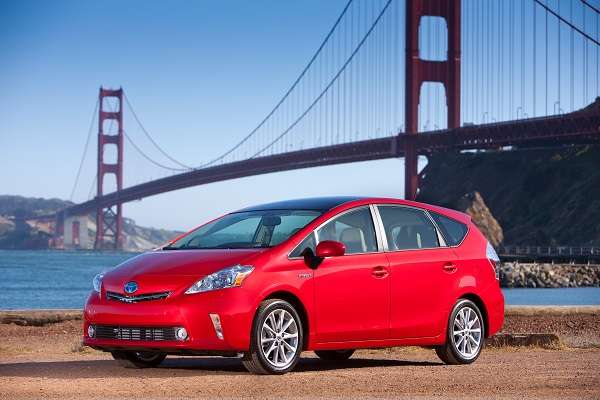 Toyota has always delivered a 10% increase in each new generation Prius. This next one will do much better.
Advertisement

The next generation Toyota Prius needs to break new ground for fuel efficiency and low carbon emissions. How could it touch 60 MPG? Using a more refined version of the same drivetrain it has now will not be enough. However, Toyota has already announced four significant ways the next Prius will move the needle towards 60 MPG. Three of those technologies are not currently used in the Prius.

The Prius is already overdue for a major redesign based on Toyota's past design cycles. We suspect that the next generation will be a model year 2016, since if it were to be a 2015 we would already have seen it. Here is what we expect to see in the new Prius that will push its fuel economy to 60 MPG.

Prius Generations - MPG
The first US Prius could achieve a combined MPG of 41*. Looking back, that is still an amazing milestone for a model year 2000 vehicle. The most popular vehicle that year, the Ford F-150 4WD, got 15 MPG combined with its base V6 engine. The next Prius jumped to 46 MPG. A 10% leap. The third generation Prius, on sale now, achieves 50 MPG, just under 10%. If that trend were to continue the next Prius would achieve a 55 MPG combined rating. That would keep the Prius safely in first place among cars without plugs, but would it be big news? Maybe not.

Toyota's Head of Hybrids Sets the Bar High
Beating 55 MPG is the goal as stated by Toyota’s Managing Director, Satoshi Ogiso. Speaking about the next Prius this year he said “Prius MPG has improved on average by about 10 percent, each generation. We are very motivated to beat our record.” But how? In that same speach he mentioned that the next Prius gas engine will achieve a higher efficiency than the current one, by about 2%. What that means for overall MPG ratings is hard to know, but let’s assume it adds 1 to 2 MPG. We have a long way to go!

New Prius Power Electronics Save 5 to 10%
Next, Toyota separately announced that it has developed a new power electronics chip type. Using silicon carbide as the substrate, Toyota announced it has the ability to improve mileage in hybrids by about 5%. That means that Toyota could add up to 3 MPG with this technology very soon. Still, we have not come close to 60 MPG.

Prius Super Capacitors
To jump from 54 MPG to 60 Toyota still needs to add about 10% more to its overall efficiency. Until recently, it was hard to imagine how that could come to pass. Then Toyota Motor Sport team principal, Yoshiaki Kinoshita told Drive.com that the super capacitor technology it is using in its Le Mans endurance race cars is being looked at for use in passenger cars. Kinoshita was quoted by Drive as saying “With this [system we use on the race car], it is 60 times better under braking than in a Prius. If we can bring some of this technology into the Prius then the Prius will be even better for energy. I think in the future, we will have a kind of hybrid battery system.”

Using super capacitors to conserve energy is not new to cars in the US market anymore. Mazda broke that barrier in its current passenger cars. Perhaps by combining the fast acting super capacitors with current battery technology Toyota’s hybrid drive system could add 10% to the vehicle’s efficiency.

New Prius Heat Transfer Patents
Finally, as an added safety net we will pass along news released today by Toyota that its R&D department has developed a new heat transfer technology that can increase efficiency - you guessed it - by 10%. Eric Dede at Toyota developed and patented what Toyota calls a Micro-channel Cold Plate. It will also have EV applications.

The Prius is one of Toyota’s most important cars and is often called the most popular car in California (based on overall sales). Toyota’s Prius has rebounded in sales this past May after a multi-month dip. Interestingly, the Plug-In Prius defied skeptics and sold strongly in May even though California’s green HOV stickers had run out two months prior. Given the momentum that the Prius has, and its significant effect in lowering Toyota’s Corporate Average Fuel Economy rating, we should count on a big jump in miles per gallon when the next Prius is revealed.

*All fuel economy numbers stated in this article are current and taken from www.fueleconomy.gov

lasvegascolonel wrote on August 2, 2014 - 8:55pm Permalink
I hope Toyota joins all other auto manufacturers and uses lithium-ion batteries in all their vehicles. In Europe, sophisticated buyers demand modern lithiums in the Prius V. Here, most buyers are clueless and Toyota gives out the old, slow-charging, bulky nickel-metal hydrides from the last century.
Carol Swanson wrote on April 1, 2015 - 6:59pm Permalink
Interested in design of 2016 Prius.
Don Murray wrote on July 3, 2015 - 8:28am Permalink
I plan to take a look at the 2016 new prius, If it is a nice design I'll purchase one, hopefully with a lithium battery. Don Murray