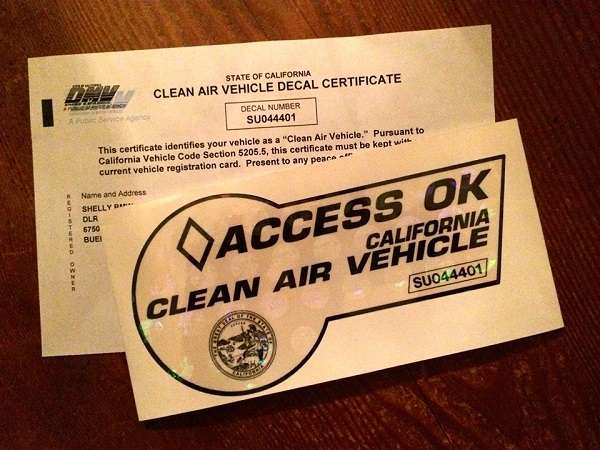 The predicted drop in Prius Plug-In sales by some EV advocates does not come to pass. Rather, sales quadrupled in May and the PIP outsold every green car except the Leaf.
Advertisement

The 2014 Toyota Prius Plug-In hybrid electric vehicle just had its best month of sales ever, despite one factor that many said would result in its sales dropping significantly. That factor was the availability of the California HOV lane stickers for the Prius Plug-In. The strikers for it ran out in April. Yet, despite the dire warnings from some EV advocates, the Prius Plug-In sold better in the month of May than it ever has. In fact, sales were up four-fold over May 2013. It is again the number two vehicle with a plug in the US for the second straight month after only the Nissan leaf, which also had a banner month of sales.

California HOV Sticker Program Runs Out of Green Stickers
In California there is a sticker system that dictates which cars get to drive with just one occupant in the “High Occupancy Vehicle” or HOV lanes. To those in California, the biggest green car market on Earth, these stickers are a big deal. Electric vehicles (EVs) have one type of sticker (white) and cars that can run on electricity sometimes, but also have a gasoline powered engine, get another sticker (green). It is a bit more complicated than that (of course!), but that is a quick summary. In April the green ones ran out, but as far back in March the California Department of Motor Vehicles ended a program that allowed car dealers to pre-emptively apply for the stickers. There is no doubt that both dealers and buyers were aware by May 1st that the Prius Plug-In would not receive a sticker.

Why Do EV Advocates Dislike the Prius Plug-In?
For reasons that we have a hard time understanding, there are a lot of negative feelings from advocates of electric vehicles towards the Prius and the Prius Plug-In. It is very common for our stories to have comments from EV fans expressing thoughts other than positive about these green vehicles. For example, one reader and commenter we respect wrote under a popular Prius Plug-in story we published about 5 weeks ago “The PIP doesn't provide much value as a plug-in hybrid. Range is crap and it costs about the same as a Volt after tax credits. My guess is that a ton of people buy these in California to get green stickers. They drive them every day, never plugging them in. This will all change next month. The green stickers have run out.” This is not an unusual comment. On another site we follow a premium EV owner expressed her frustration that people were buying affordable Volts and Prius Plug-Ins, and to paraphrase her comments, “never planning to run them on electricity, but are just hogging up the HOV lanes burning gas.” Our survey of Facebook and other social media commentary find similar examples of this viewpoint. We don’t agree, or disagree with it. We simply wish to convey that the sentiment exists and that it is not just one or two vocal advocates as far as we can determine.

Sales Go Up After Stickers Run Out
Now that the valuable green stickers have been gone for more than a full calendar month, and sales have not gone down, but rather skyrocketed, we surmise that the Prius Plug-In does have a legitimate following that is not buying it simply so they can access the special lanes.

Stickers Could Return
However, the stickers may not be gone forever. As has been reported by Transportevolved.com, there is a pending bill to extend the program. We checked with 3 sources we know that are closely following the developments of the bill AB-2013 in California, and also looked at the bill’s status on legiscan.com. All our sources agree that at the time of this report the program is not yet extended.

Prius Outsells All EVs Combined
The Prius nameplate remains the best-selling green vehicle in the world. Although it had been on a sales slide since late 2013, the Prius family overall was up this month and sold 26,793 units. The Prius family outsold the entire EV and plug-in market in the US by a factor of about 2 to 1 in May.

Aaron Turpen wrote on June 3, 2014 - 11:53pm Permalink
"Boo hoo, if I don't get a bunch of freebies for buying my green car, nobody's going to want one!" Guess that stupid meme is done.
Brian Keez wrote on June 4, 2014 - 4:13am Permalink
I'll bite, the PIP irritates me because it is configured to turn on the gas engine even when not required. So if it's buring for gas with a fully charged battery, it is not an EV. Given that, why the heck do people plug them in, taking up a public charger all day? Is it just because they want the parking space (usually close to an entrance)? The car takes an hour to charge on L2, but I see PIP's fully charged, plugged in for hours. Then the driver gets in, starts the car and the gas engine starts! I bet that folks that bought last month got that HOV sticker somehow. Any new PIP owners want to explain how?
John Goreham wrote on June 5, 2014 - 8:59am Permalink
Great comment Brian K. Bad behavior at charging stations is not OK. However, are your fellow electrified car owners the worst of that problem? I cannot say for certain that the reason the Prius often uses its gas engine when it still has some charge left is due to an efficiency algorithm, but I strongly suspect it. Here is a post about the new BMW i3 REX I saw today. Check out what the owner is saying and perhaps it might explain to you a bit about why EVs that have the benefit of an on-board engine might use that even if some charge is still left in the batteries:::: "I was at the UK launch of the new 5 door Mini last night at BMW UK HQ, and had the BMW UK i3 product manager with me in my demo i3. I had (supposedly) 40 miles Rex and 20 miles electric for a 75 mile journey home. He set up a predefined button to "maintain charge" using the rex and recommended if mileage was tight/short using the rex first to maintain charge, then find fuel last, rather than use up all electricity and then rex electricity - its more efficient that way. Did as suggested, and set at ecopro+ got home with 20 fuel and 14 electric left- nice " I hope the post helps explain why the issue is not so black and white. Thanks for your excellent comment.
Allan deLaubenfels wrote on June 7, 2014 - 2:05am Permalink
I have no defense of bad behavior at charging stations. But the PIP (I have owned on for more than two years) is NOT an EV. It is a Plug in Hybrid. When the gas engine comes on before the electric charge is gone it is because the car is protecting the electric portion of the hybrid system from over stress which could lead to early demise. The reliability of this car is the payoff. If you want an EV, they exist, Buy one. The PIP does exactly what it was designed to do, provide economical and dependable service using a combination of gas and electricity.
Brian Keez wrote on June 7, 2014 - 9:02am Permalink
The Prius is a great gas-burner. I was addressing the dislike that EV drivers like myself have for the PIP when it is portrayed as an EV. I'm glad that an owner like you points out that it is not an EV because it is portrayed as an hybrid similar to the Volt. It is not similar to the Volt which can operate 100% electric for 35+ miles without a need to 'protect the hybrid system' by burning gasoline.
Allan deLaubenfels wrote on June 8, 2014 - 2:44pm Permalink
Brian - I said it was not an EV. Th Prius Plug in Hybrid is a hybrid similar to the Volt it the respect that it is capable of significant EV o nay miles with more frequent charges than the Volt. Over the two years that I have owns my PIP I have an exact 50/50 split between all EV and gas/electric hybrid operation. The difference between the Volt and the PIP other than the traction battery size is that the Volt uses gas as a range extender rather than a partner with the electric drive. The Volt and the PIP ARE different, but they are similar in the way they charge and operate.