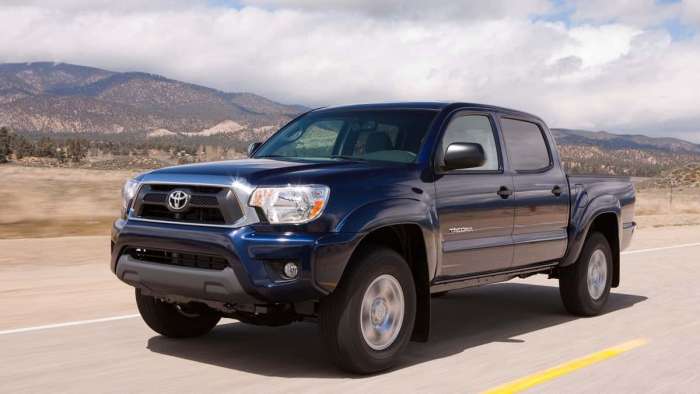 The 2012 Toyota Tacoma tops another list. This time it is the best used truck under $20K. Here's how it was judged.
Advertisement

A high resale value is always a plus when you already own the truck, but it can be a negative when you are shopping, since it means a high purchase price. Then again, if you go on to sell the truck later, your value is still retained. So how did iSeeCars.com come to decide that the Toyota Tacoma is the best used truck for $20K right now? Mainly in two ways.

iSeeCars analyzed over six million cars and trucks from model years 2011 and newer to determine the used vehicles that demonstrated long-term reliability and have an average safety rating of at least 4 stars out of 5 from the National Highway Traffic Safety Administration (NHTSA). Because a good vehicle can be found across all budgets, iSeeCars further examined which used vehicles are the smartest buys across multiple price points. “A safe and reliable vehicle can be found across a wide range of price points, and older vehicles with established reputations for longevity and safety can help consumers get high quality cars at more affordable prices,” said iSeeCars CEO Phong Ly.

Related Story: Shopping For a Used Toyota Tacoma - The Problem Years to Avoid

Toyota Tacoma Reliability
At Consumer Reports, the 2012 Toyota Tacoma scores a perfect 5/5 for reliability. The ranking is taken from owner surveys and we like that kind of data. Who cares what an editor thinks about reliability? It is what owners find that matters. Not only did the 2012 Tacoma earn the top ranking for reliability at Consumer Reports, every model year from 2010 through 2015 did. That is a legacy of reliability. “Toyota trucks are known for their reliability and longevity," said Ly. He went on to add, "The compact 2012 Toyota Tacoma was named the ‘Best Compact Pickup Truck for the Money’ by US News and World Report and is praised for its class-leading fuel economy and smooth handling"

Toyota Tacoma Safety
Do most truck owners rank safety as a high priority when shopping used? Not many would be our assumption. IIHS testing shows that the Tacoma scored well on all the crash tests conducted by the group in 2012, with Roof Strength being the only score lower than Good, on which the Tacoma earned a Marginal rating.

In addition to the Tacoma, the larger Toyota Tundra was also on the list of best trucks under $20, but for model year 2011. "The Tundra is a capable hauler with a powerful engine and strong towing capability," said Ly of the Tundra.

You can read the full iSeeCars.com study here. If you own a 2012 Tacoma, please tell us in the comments below if it has been a reliable truck for you. Your experience may help a used truck shopper make an informed decision.