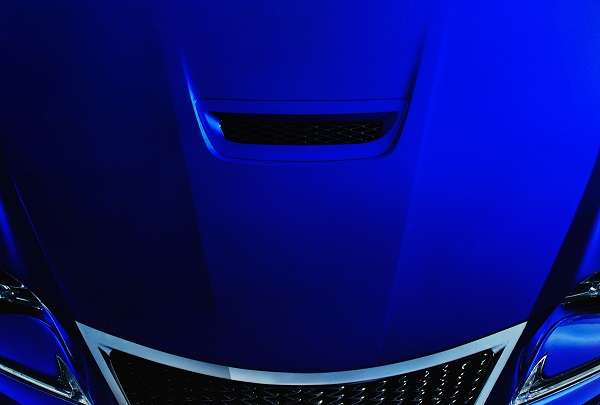 The all-new Lexus F sports coupe is coming in a couple of weeks. The big build up is making us wonder if this car might be a BMW M4 challenger.
Advertisement

Lexus teased its fans again today with this second sneak peek at the new “F.” In our prior story we had shown the first photo and reported that the new gritty sports car is slated for a reveal at the upcoming Detroit auto show. That is a weird venue for a Lexus release, rather than say the Tokyo auto show, but then this car will be built to serve American customers looking for an alternative to the BMW 4 series and M4. At the Detroit Auto show a GM, Ford, or Fiat (Chrysler) product will win best of show even if Lexus brings a car that shakes the car world up.

The new “F” will be given an official name later, but for now we guess it will be called the RC-F. It has two doors like the new RC 350 will have and it looks a lot like the current IS F in the spy snippets. Lexus has told us that the car has “half the door and twice the roar.” Of what exactly it did not say. However, if it has twice the roar of the IS 350 it will need to pack 608 horsepower, if it is twice the roar of the IS F it will need about 900 horsepower, so we are guessing that Lexus is referring to the exhaust note or just being silly.

The new RC 350 is based on a mash up of the GS and IS platform and has the same drivetrain as those cars’ V6. However, it will also be offered as a hybrid. This is the new normal. Car companies build hybrid drivetrains and then they spread them out across the line. Who are we to judge?

Looking at this little spy shot along with the first we can now see that the show car at least has a hood scoop. Normally, being a pony car fan a hood scoop would excite this writer. However, lately hood scoops such as those on Subaru STI and WRX cars are used to cool the incoming air via an intercooler. In that usage a turbocharger is employed. As an IS 350 owner, former Toyota Supra owner, and lifelong Supra fan, a forced induction engine would be welcome if it was a V6 and had about 450 horsepower. However, if Toyota is thinking about dropping in the new 2.0 liter turbo it is planning for the LF-NX crossover we will be cautiously pessimistic about the final outcome.

Let’s not end on a sour note. That Lexus is building something designed to serve a function other than putting old people to sleep is a major development, and one we look forward to with relish.