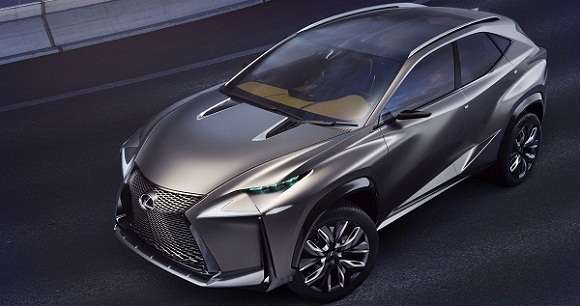 Lexus breaks the mold with the new LF-NX compact sport crossover. With outrageous styling and a new 2.0 liter turbocharged four cylinder drivetrain, it will draw new buyers to the Lexus crossover line from BMW and Range Rover.
Advertisement

The new Lexus LF-NX Turbo concept was shown today at the Tokyo Motor show. The LF-NX will be tasked with taking on rivals like the BMW X3 and Range Rover Evoque. Previously announced with only a hybrid drivetrain, Lexus has announced that the vehicle will also come with a powerful 2.0 liter, four-cylinder turbo. It will most likely have about 250 horsepower. Like its rival the X3 xDrive28i, the vehicle is about 183 inches in length. It will retail for between $ 39,000 and $49,000 depending upon trim level and it will slot in under the tremendously successful RX 350 as Lexus’ entry level crossover.

Lexus LF-NX Turbo and Hybrid Drivetrains
Lexus’ new 2.0 liter Turbo will feature its advanced high tumble port, fan spray fuel injection, D-4S and VVT-iw combustion technologies. Along with an cylinder head integrated exhaust manifold the arrangement promises excellent throttle response and extremely clean emissions. The turbocharger will of course be a twin-scroll so as to provide torque across a wide plateau of revs and minimal lag. Lexus plans to offer the vehicle with not only thrilling performance, but also class-leading fuel efficiency for a non-hybrid vehicle. The hybrid version of the LF-NX will also lead the world in fuel efficiency among compact luxury crossovers upon launch.

All of Lexus major rivals have shifted the bulk of their crossovers to a 2.0 liter turbocharged engine. Only Acura and Infiniti still offer a strong V6 in vehicles this size. Turbocharged engines perform well on the EPA mileage test cycles and are clearly the present wave of fuel economy steps automakers have taken to inch ever closer to the CAFÉ mandate of mid-50s MPG.

Lexus LF-NX Styling
Lexus is apparently very tired of being called boring by critics. The new style will integrate the company’s signature spindle grill. This new design feature first shown on the GS 350, and now across the Lexus line has created a sales explosion at Lexus. The GS and IS 350 both have seen a huge leap in sales. So much so that Lexus is having trouble meeting demand for the IS sports sedan. Like this new compact crossover the Lexus IS is tasked with defeating BMW, something it has now done repeatedly in comparison tests.
The style is very angular. Bold is an understatement. Lexus calls the body diamond shaped and from the photos that is apparent. The wheel arches and fender flares are very pronounced and will almost certainly house some massive wheels, possibly up to 20 inch in diameter when in production like the concept currently wears. Diamond shaped LED headlights continue the theme. Throughout the body sharp creases and dramatic angles create a look that can be called anything but boring.

Lexus LF-NX Interior
That Lexus has already announced details of the interior means to us that this vehicle is ready for a 2014 launch to production. As in all new crossovers the cockpit is driver oriented in the fashion of sports cars. Like the new IS, this crossover has the Lexus ‘Human Oriented’ L-finesse design. It will feature the second generation remote touch and also a new display for Lexus.
Thankfully, the concept does not feature wood accents that make modern cars look old. Nor does it make due with make-believe carbon fiber appliqués which make expensive cars look cheap. Instead Lexus has chosen brushed metal accenting for trim. Interior illumination is red, although that may change in production for reasons of practicality. Also, the center console which goes straight back to the rear and bisects the rear passenger seats will almost surely go away to add a fifth seat.
Overall this new Lexus LF-NX Turbo is a wonderful addition to the Lexus line for fans of the brand. Although many (this writer in particular) would have liked to see the 3.5 liter V6 in the new sporty crossover, government mandates will soon start to eliminate such powerful engines if even 1 MPG on the test cycle can be gained. Although Lexus has not announced a production schedule, based on this concept, it would seem as if the LF-NX will be ready for an early 2014 launch.

Do you think this new vehicle will be a hit or a miss for Lexus? Comment below.