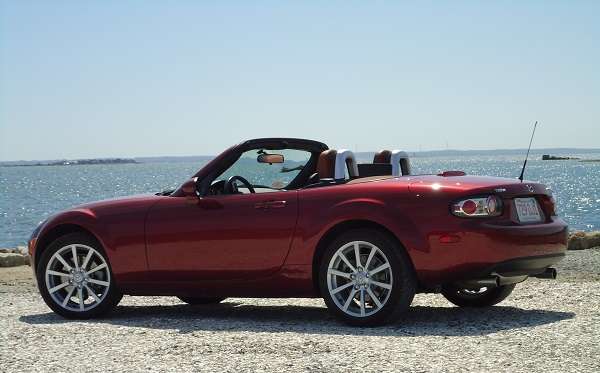 Mazda has created a website to celebrate a quarter century of the world’s favorite drop-top. Any Miata fan will want to check it out.
Advertisement

In 1989 Mazda reintroduced the fun to drive convertible roadster. The concept was not new. The world knew about Fiat Spyders, Alfa graduates, and small British convertibles. What Mazda brought was affordability, reliability, and durability to the roadster. The official name now in the US is the Mazda MX-5, but as the former owner of a 2007 Miata, I can tell you that nobody calls the car by its formal name. In the US it is a Miata and in Japan simply, “Roadster.”

Whatever name is applied the car is all about driving pleasure and fun. I learned this first hand when a friend in California took me for a ride in his first generation Miata around 1990. At that time I was more into cars like Integras and Civic Sis. Having owned a Supra I was skeptical that a car with so little horsepower would be fun. I was so wrong. From that moment I loved the car for its real-world usability and handling. On back roads the Miata comes alive and it does not matter what generation car you are in. It feels quick and nimble. It is the gocart you always imagined as a kid when you pounded over nails to make axles on a plywood mess you loved to sit in and roll.

My own Miata came to me after a string of good sales lead to a bonus the exact size of the initial payment on a lease for a Miata. I bought the best one ever made (in my opinion). The 2007 Grand Touring with the handling package. The current Miata is still almost exactly the same as that car. This was a car so fun to drive I would get up early on weekends to take it out for a spin.

Later I attended Skip Barber driving school and one of the real reasons was to drive the Miata on small courses set up infield at Lime Rock Park. The following year I returned and drove a race-spec Miata on the course itself as part of an introduction to racing program. Having now driven cars like the Mercedes SLS AMG, the Corvette Stingray, Camaro ZL-1 and other near super cars on track I can say with sincerity a Miata is just as fun as any of these. If you need proof, Google “Miata passes” and you will see Miatas passing Ferraris, and all other types of cars on a racetrack.

The new Mazda 25th anniversary website can be accessed here. You will notice there are not many photos above. That is because Mazda has so many on this great website. We hope you will take a moment to look back. If you have ever been in the Miata club we know you already have.

Please take a minute to write a comment below if you have owned and loved a Miata and then share the story so others can add theirs.