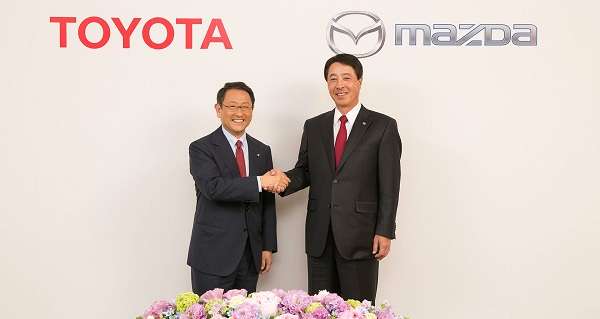 Mazda announces that it will team up with Toyota. Here’s what it means for owners of the cars.
Advertisement

Today Mazda and Toyota announced a new partnership. Mazda has had such relationships in the past, notably with Ford. Toyota presently works with Subaru and co-produces a low-volume sports car with Subaru. Toyota has even outsourced some of the Camry manufacturing in the U.S. to Subaru facilities. In addition, Toyota has recently worked with both BMW and Tesla on a limited basis. The expectation is that this new partnership with Mazda will be wide-ranging. Don’t be too surprised if the next announcement is about Toyota taking a significant equity stake in Mazda.

Mazda is a small manufacturer in some ways, but its SkyActiv technology and superior handling and styling have given Mazda the opportunity to punch above its weight class. Toyota is the most profitable, and in many markets leading seller, of automobiles. Working together the two companies will be able to build upon each other’s strengths. Like many business relationships, the Toyota Mazda partnership started small-scale. The two collaborate on small cars in Mexico already. Perhaps that relationship grew, or perhaps it was a way for the two to see how their cultures and priorities aligned before committing further.

Mazda’s President and CEO Masamichi Kogai, and Toyota’s President Akio Toyoda both offered short statements on the new team relationship. In a cool nod to the Japanese business tradition, Mr. Toyoda mentioned “100 years” in his statement. Many Japanese companies have on-going 100-year business plans. Mr. Kogai was sure to mention he held Toyota (and Toyoda) in high esteem.

Although both Mazda and Toyota have vehicles in the same categories, they are very different in their personalities. For example, the Mazda3 is compact sedan which focuses on driving enjoyment and offers interiors on par with Audi. The Toyota Corolla is a compact sedan but focuses on value, durability, and reliability above all other considerations. Imagine a vehicle that merged these two personalities.

Mazda needs Toyota more than the world’s leading automaker needs a smaller partner. However, Toyota has been very active lately and is partnering with brands it feels bring excitement to the segments they are stongest in. Tesla, BMW, Mazda and Subaru all share that common aspect. Toyota is also not shy about looking to other companies for a partnership in which the Toyota engineers will see a new perspective. Tesla is the obvious example, but BMW is a better one. BMW makes cars feel and handle unlike any Japanese car does. By partnering, Toyota hopes to gain some insight into how BMW does that. Mazda’s SkyActiv fuel saving technology does not surpass Toyota’s, but it is a different approach.

Mazda has many fans, including this author, who will have fingers crossed that the company will not partner so closely with Toyota that it adopts entire Toyota platforms the way Mazda did with Ford. Time will tell where this is heading, but it is easy to see how both companies will benefit. It is also easy to imagine that Toyota might make a big play at some point and bring Subaru and Mazda even closer.

Aaron wrote on May 15, 2015 - 12:04am Permalink
I think that Toyota needs this as much as Mazda does. Toyota is desperate to stay at the forefront of the green car front and keep its branding in that regard. Hybrids have done their thing, but are beginning to be yesterday's news. Toyota doesn't have anything after hybrids - very little plug-in or battery-electric engineering. By adding Mazda's SKYACTIV high-compression engine tech, they jump ahead significantly and stay abreast of Ford, whose EcoBoost and Energi options are an obvious match. Further, Toyota doesn't have much in the way of turbocharging and Mazda has mastered it. It's a serious gain for Toyota in terms of time-to-market savings, I think.
John Goreham wrote on May 15, 2015 - 9:21am Permalink
I think you are spot-on. Great insight. Thanks
Nich wrote on March 11, 2017 - 11:12am Permalink
Toyota would continue to be the most reliable and on top of it be the most exciting and fun cars on the market if they merged all their vehicles with Mazda's Exterior/Interior style and it's SKY-ACTIV Technology and I-ACTIVSENSE. One thing Toyota really needs to do is get rid of the crap Entune system they have. It is terrible in every way. Its very unorganized the touch screen is horrible and its features are full of stuff no one really cares for. Not to mention the so called Premium JBL Audio Entune system. There is nothing Premium about it. It sounds just like the base factory audio system. It's kind of embarrassing........So Toyota you should get rid of your entire Entune JBL systems and integrate the Mazda-Connect System with the amazing Bose Center Point Sound System. Their system is damn near flawless. (Just some advice)