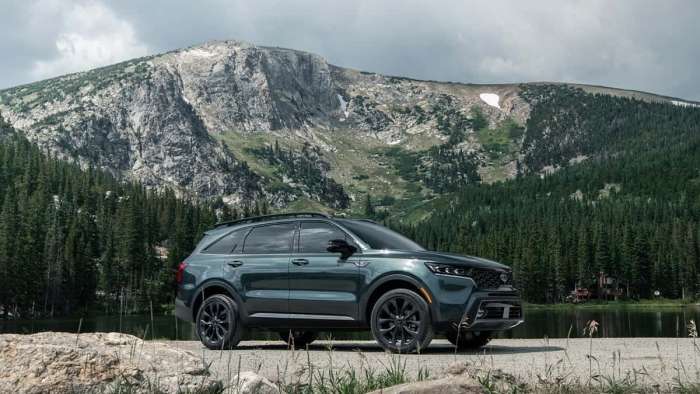 Automakers cannot bring their plug-in hybrid-electric vehicle crossovers to market quickly enough. Here is what the next Sorento will be like.
Advertisement

Customer demand has overwhelmed Toyota's ability to deliver its hot new Toyota RAV4 Prime plug-in hybrid-electric vehicle (PHEV). Buyers are so desperate to have one that dealers are pricing them above MSRP in California and other EV markets. Like Ford and Mitsubishi, every automaker is desperate to bring out their own crossover with a plug. Hyundai announced its next Tucson would be offered as a PHEV, and now Kia is also announcing its Sorento will be a PHEV.

“Sorento has always been one of Kia’s premier products,” said Sean Yoon, president & CEO, Kia Motors North America & Kia Motors America. “Its combination of style, utility, safety and comfort have made it a perennial customer favorite. This stunning new Sorento sets the bar in the compact SUV class even higher and represents the pinnacle of Kia design and engineering. We’re extremely proud to add it to our line-up of incredible automobiles.”

Unlike the list above, the Sorento is a three-row crossover. It can be configured with 4+2 or 5+2 seating. When the Sorento arrives, it will likely be the most affordable three-row electric vehicle in America.

Related Story: EVs Like Toyota’s RAV4 Prime and Hyundai Tucson PHEV Being Slowed Down By The U.S. Election Cycle

Kia has not given us full details yet on the new Sorento PHEV, but has dropped the most important data. The vehicle will use a plug-in turbo-hybrid powertrain. Electric-vehicle miles will be about 30 on a full charge of its 13.8 kWh battery. The total horsepower will be 261. 30 miles should be more than enough for daily chores, and may get some commuters back and forth to work using little or no gasoline. We reached out to Kia who confirmed that the Sorento is expected to qualify for a $6587 tax benefit.

Kia will also produce a turbo-hybrid trim with no plug. A straight-forward hybrid. This vehicle will have a bit less power, rated at 227 hp. Its combined fuel economy will be 37 MPG according Kia, making it one of the most energy-efficient three-row crossovers ever built.

Look for the new PHEV Sorento in early 2021.