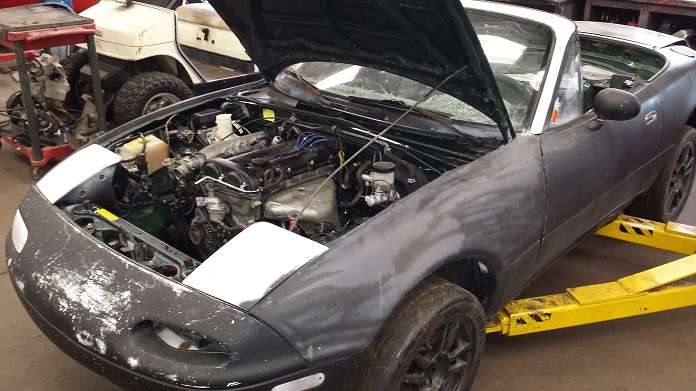 The 1.6-liter engine in this Mazda Miata lived a full life as a daily driver. Then it was used in a racecar. Now it is being installed in a second race car after the first one crashed and was destroyed. How long can it go?!
Advertisement

A quarter-century ago an NA Miata was sold and used as a normal, everyday driver. Its unmodified 1.6-liter engine made its drivers very happy. After some time, it was sold on and eventually wound up pushing its chassis around racetracks as a Spec Miata racecar engine.

By then the race team had done a valve job to let the top of the engine breath a bit better. They also decked the engine to give it a smidge more compression, ported the exhaust manifold, and added a high-pressure fuel delivery system. That is pretty much it other than routine maintenance.

In the first racecar the engine was in, it was dyno'd and showed off 127 hp to the rear wheels. That's roughly ten more hp than the car shipped from Hiroshima with back in the early 1990s. The power is still strong in this diminutive four-banger and it has just been transplanted into a new racecar after the prior one was damaged beyond repair in a racetrack crash. The "new" car the engine is going into cost the team $300.

We asked mechanic Mark McMullen, of G&M Services in Millis, Massachusetts to give us an understanding of how many races this engine has run. Mark looked thoughtful for a moment and started to go through the count. "Three years, two races per day, say six in a given race weekend..." Mark wasn't sure in the end, but it is approaching 100 by his guesstimate.

We asked Mark why the team he supports doesn't use a 1.8-liter engine in their NA-generation Miata racecar. Mark explained that the way the Spec Miata, ITA, and STL rules work, the 1.6-liter engine is not at a disadvantage because the rules allow for more modifications. Given the lifespan of this amazing little racecar engine, we asked Mark if the modifications make it more likely to fail. Mark told us, "There are teams that go a little further with the tweaks, but after a certain point those engines just blow up." Apparently, Mark and his team know right where that point is.